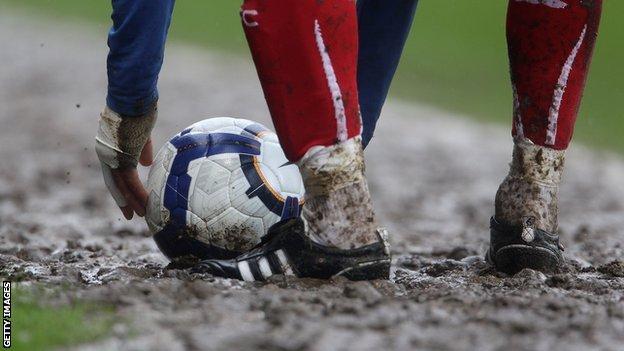 Plans to reintroduce artificial pitches in English football will be discussed at the Football League's annual general meeting in Portugal this week.

On Thursday, the 72 clubs will debate the findings of a consultation period that drew 1,700 individual responses from clubs, fans and official bodies.

The idea could be taken forward to a formal vote at some point in the future or dropped altogether.

Several League One and League Two clubs are keen on artificial surfaces.

They are seen as a way of increasing much-needed revenue, but widespread opposition to the reintroduction is likely to end the prospect of their reintroduction.

The AGM will also see a vote on a joint proposal from Derby County and Birmingham City to revert to seven substitutes.

The number was reduced to five last summer, to the surprise and anger of many managers in the Football League.

Brighton boss Gus Poyet described it as "comical" and West Ham boss Sam Allardyce said it was "outrageous", while Keith Millen, in charge of Bristol City at the time, argued it "created unwanted problems".

The move, suggested by Burnley at the end of last year's AGM, was voted in at an extraordinary general meeting before the start of the 2011-12 season.

However, the proposal to return to seven next season is expected to be passed in Portugal.

The outcome of the discussion on artificial surfaces is less clear.

BBC Sport broke the news of their possible return last year and the Football League released a 32-page document on its website in February, starting a 10-week consultation period that ended on 30 April.

The League has since been collating the material, including contributions from the the Football Association (FA), the Premier League, the Professional Footballers' Association and the League Managers' Association, and will present its findings to clubs in Portugal.

If there is sufficient support for the idea, the Football League could put a formal proposal to the clubs during next season with a view to reintroducing artificial surfaces for the start of the 2012-13 campaign for an initial five-year period.

A change of regulations normally requires at least 50% support from all 72 clubs, in addition to backing from a minimum of 50% of the Championship sides.

However, it remains undecided whether any proposal to reintroduce artificial pitches would apply to the whole of the Football League or just Leagues One and Two.

In the event of the latter scenario, clubs could face the prospect of having to revert to a natural pitch if they won promotion to the second tier of English football.

Artificial surfaces were banned by the FA in 1988 and the last remaining one in the top four divisions - at Preston North End's Deepdale - was ripped up in 1994.

However, advances in technology, combined with the possible financial and community benefits, has led to a rethink on the subject.

Accrington chief executive Rob Heys estimates that the cost of installing an artificial pitch would be around £500,000, which would be recouped through increased revenue streams.

"There is an income to be gained from hiring the pitch out and money to be saved in maintenance costs and the fact that you can train on it," he explained.

"The community benefit is that you can get people down to the ground seven days a week rather than just 23 times a season for home fixtures."