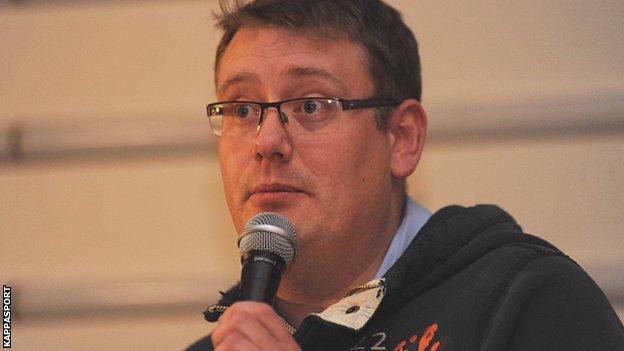 The chairman of the Kettering Town Supporters' Trust admits the club faces a 'huge task' to avoid administration.

Severn told BBC Northampton: "There's a lot of scepticism about. There's been so many false dawns.

"We've asked the fans to put their hands in their pockets since December but we need to give that little bit more if we can."

Severn continued: "This is the biggest crisis we've had. If the club is to have any chance of moving forward, it's going to need all the supporters that came out and helped us last summer doing it again.

"It's a huge task to avoid administration. I'd hope that we can, but without the season ticket revenue and things happening off the field, there's only so much we can do."

The Football Conference has confirmed a meeting took place with Rolls on Tuesday 8 May at which assurances were sought regarding the club's ability to complete its fixtures and meet its financial obligations in the Blue Square Bet North in 2012/13.

A spokesperson for the Conference said: "Kettering were advised, in writing, of a number of conditions to comply with and respond to by 25 May.

"Dependent on that response, it could be that the football club may have to lodge a financial bond [with the Conference] prior to the AGM on the 9 June to ensure the integrity of the competition."

Neither the Conference, the club nor the Trust will confirm what those conditions relate to, although the value of the bond is known to be a six-figure sum.