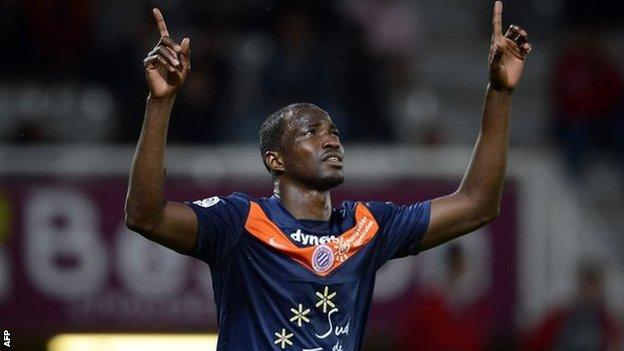 Two goals from the Nigerian international John Utaka sealed a first Ligue 1 title for the French side Montpellier on Sunday.

Montpellier came from a goal down to win 2-1 at relegated Auxerre, and deny big-spending Paris St Germain the title by three points.

The match was delayed on numerous occasions, as angry home fans vented their frustration.

Utaka and his team-mates, though, kept their nerve to create history.

A modest outfit situated in southern France, Montpellier were playing only their third season back in the top flight, after five seasons in Ligue 2.

Their aim at the beginning of the campaign was survival. They ended the season as champions for the very first time.

"It's incredible. I can hardly find the words," Montpellier goalkeeper Geoffrey Jourdren said.

"Our only goal was to stay in the top flight and in the end we are champions. I'm going to enjoy it because it will probably be the only time it happens to me."

Crowd trouble meant that the match finished two-and-a-half hours after it started, as Auxerre supporters hurled tennis balls, toilet paper, tomatoes and then flares onto the pitch, causing three interruptions and anti-riot police to be sent in to restore order.

Utaka has scored some big goals for Montpellier this season, including one in the 2-2 draw at PSG in February, as well as the winner at home to Bordeaux less than a week later.

None, though, will be bigger or more significant than the two he bagged on Sunday, securing the league crown and European Champions League football next season.

Montpellier have their name etched on to the Ligue 1 honours board. John Utaka, meanwhile, has his name indelibly inked into the history of Montpellier HSC.