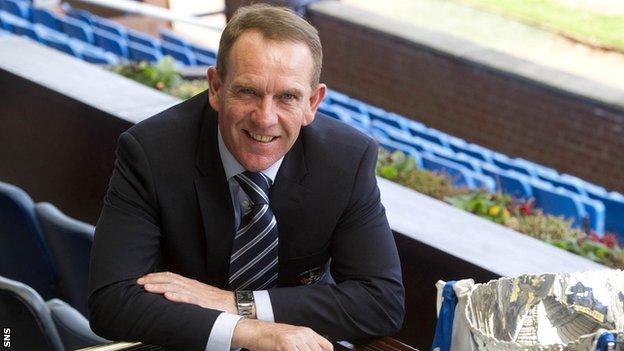 Having committed his future to Kilmarnock, manager Kenny Shiels hopes his son Dean will do the same.

"Dean had a fantastic season with 15 goals from midfield and his assists have been phenomenal," said Shiels, who has signed a new two-year contract.

"He's one I'd really like to try and keep but just let's wait and see with that.

"He's one of my sons at the club, that's how I like to look at them all - as part of the family."

Shiels guided Killie to Scottish Communities League Cup glory in his first full season in charge with victory over Celtic in March.

And the 56-year-old insists remaining at Rugby Park was always his first choice.

There's a recession on and we have to keep cutting, like many other clubs

"I was always wanting to be here, it was so much in my heart," he explained to BBC Scotland.

"I've got a fondness about Kilmarnock and I want to be here so much."

Shiels left his post as Tranmere Rovers' head of youth in 2010 to become assistant manager at Killie and took charge after Mixu Paatelainen became Finland's national coach the following March.

He also has worked with the Northern Ireland youth set-up and that experience in player development is important for his vision for Kilmarnock.

"I'm always looking at players but where I'm going to be looking more and more is at the youth here and how we can grow our own players," he added.

"That's a big part of the future of this club.

"There's a recession on and we have to keep cutting, like many other clubs.

"We know we can't compete in the transfer market, so young players will get opportunities here. We'll just see how they handle that.

"We want them to learn their trade here and in return we will get compensation, like we did with Craig Bryson and Conor Sammon."

Assistant manager Jimmy Nicholl has also agreed a two-year contract extension and Shiels insists the pair are dedicated to an attractive passing game.

"I've put in a principle of play when I came to the club with Mixu and it's cottoned on. I feel as if we have made a contribution to how the game has progressed in the last two years.

"I'm not in the least surprised that we won the League Cup."