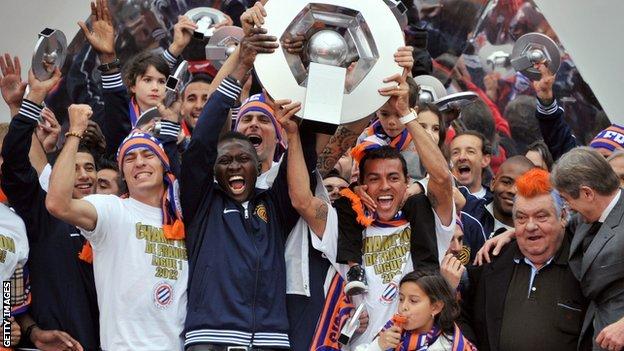 It looked as though Manchester City had found a failsafe method for winning titles: attract a billionaire Middle Eastern owner, sign a proven Italian manager, spend heavily, and the silverware should follow.

What worked in England, however, has not worked in France this season.

Qatar Sports Investment talked of European domination when they purchased Paris Saint-Germain last summer, but they will need to conquer France first.

Despite splashing £82m on players and luring Carlo Ancelotti, the capital side were pipped to the title by their modest southern rivals Montpellier, a club whose annual budget of £29m is only the 13th in France and less than the £37m France record PSG spent on Javier Pastore.

Indeed, for those complaining about the influence of wealthy foreign investors in modern football, Montpellier represent the perfect antidote.

PSG's tally of 79 points would usually have been enough for the title, but Montpellier have been extraordinary. Rene Girard's charges finished with 82 points - the second highest total in Ligue 1 history - although they still had to endure a torturous final game at Auxerre on Sunday.

Needing to avoid defeat to claim their first-ever title, Montpellier went behind before recovering through John Utaka's leveller.

An already-tense situation became almost unbearable as the second half was stopped three times due to crowd disturbances. With Auxerre already condemned to relegation, home fans expressed their anger by throwing on tennis balls, eggs, toilet paper and flares.

The third delay lasted more than 20 minutes. As police marched away the offending supporters, the players tried to remain focused. News that PSG's game had finished and that they had come from behind to win at Lorient hardly settled their nerves.

"Montpellier don't deserve this," lamented former France striker Christophe Dugarry on television. The sentiment was shared by many. This was one of the most tantalising finales to a season yet not the climax anybody had hoped for.

When the game re-started, PSG's players were huddled in front of a television. Their hopes were crushed by Utaka's winner, however - with the final whistle sounding 41 minutes later than scheduled.

"This was the longest night of my life," said relieved Montpellier coach Girard amid manic celebrations.

The city of Montpellier has barely slept since. Partying continued through the night and tens of thousands crammed in to the Place de la Comedie to witness Monday's trophy ceremony.

Nicollin, a self-made entrepreneur, is the driving force behind several sports in the region having invested in local rugby, basketball, handball and football teams. The 68-year-old has been the football club's president since its birth in 1974.

In the early years, he looked to buy success, spending lavishly on the likes of Roger Milla, Eric Cantona and Carlos Valderrama. Although Montpellier won the French Cup in 1990 - thanks in no small part to Laurent Blanc - the success did not last. When relegation ensued Nicollin tightened his purse strings and focused on youth development.

After returning to the top flight in 2009, they finished fifth in Girard's first season. Since then the team has been strengthened by a superb crop of youngsters. Midfield trio Younes Belhanda - France's young player of the year, Remy Cabella and Benjamin Stambouli have stepped up since winning the Coupe Gambardella, France's Youth Cup, in 2009. They have joined fellow graduates Geoffrey Jourdren, Mapou Yanga-Mbiwa and Jamel Saihi in the first team.

Two years ago, Montpellier broke their transfer record to sign striker Olivier Giroud for £1.7m. Last summer, they captured Brazilian defender Vitorino Hilton on a free and Cameroon left-back Henri Bedimo for £1.6m. Giroud won the golden boot with 21 goals this term; he was joined in the Ligue 1 team of the season by Hilton and Bedimo.

On a shoestring budget, Nicollin has overseen the development of one of Ligue 1's finest teams. Whether he can keep the squad together might be his biggest challenge yet.

A reported target for Bayern Munich, Arsenal and PSG, Giroud is believed to be the club's top earner on a £15,000 a week - less than a PSG squad player - and Nicollin insists there will be no big rises. "So long as I'm president, you'll never see a Montpellier player earning £40,000 a week," he declared

What is sure is that next season's Champions League will be a brighter place with Nicollin around. Renowned for his entertaining, often crude comments, Nicollin dismissed talk of the title earlier this season by saying: "If Montpellier win the league, PSG, Marseille and Lyon will be stabbing themselves in the backside with a sausage."

He later promised to copy Cabella's haircut if ever they did finish as champions.

As ever, 'Loulou' kept to his word - and while the Mohawk made him look faintly ridiculous, few would begrudge him his moment in the sun.