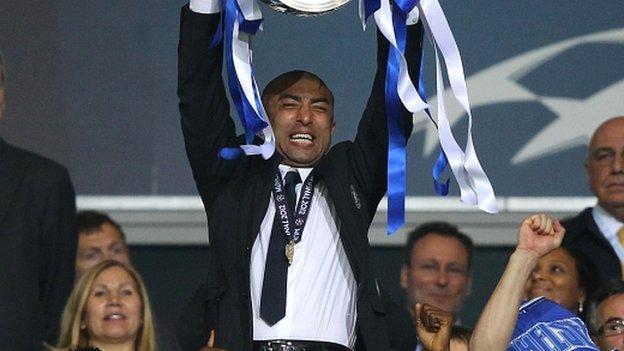 "Having been a chief executive before [at Motherwell], that option is bit of a no-brainer," Nevin told BBC Sport.

"The club should just give Di Matteo an extra year. He has done well and it doesn't upset anybody."

A rolling contract does not have a defined end date and would mean Di Matteo always has one year on his deal. If he were to leave the club, Chelsea would have to pay him 12 months' salary.

In the aftermath of Chelsea's first European Cup triumph, several players backed Di Matteo to continue, after he took over from Andre Villas-Boas in March.

And by giving him a one-year deal, it would give the club the option to tempt Barcelona boss Pep Guardiola, who has been linked with the job but is taking a year's break, at a later date.

Chelsea chairman Bruce Buck said Di Matteo, 41, was one of the candidates the club was considering, while they have also been linked with former England manager Fabio Capello and France boss Laurent Blanc.

Speculation regarding Jose Mourinho's return to Stamford Bridge ended when he signed a new contract at Real Madrid.

BBC Sport pundit Nevin added: "Chelsea have not got a big job over the next year. The rebuild will have to be done two or three years after that.

"I asked [chief executive] Ron Gourlay, 'Does it make some sense to offer Roberto Di Matteo another year, or a one-year rolling contract, and keep everybody happy if he does really well?'

"He shrugged his shoulders as if to say that's not the worst idea in the world, but said, 'We will take our time and think about it'."