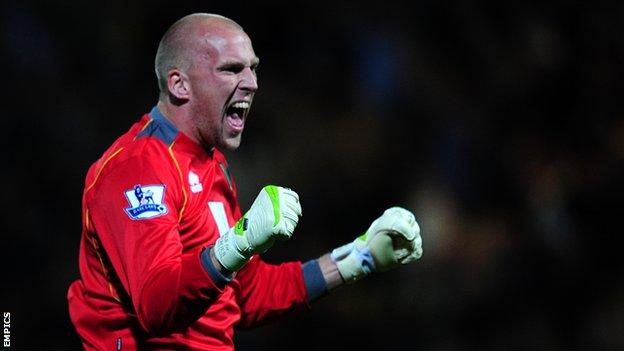 Norwich City's John Ruddy has admitted he would be "naive" to think he can overhaul Joe Hart and Rob Green in the England goalkeeper rankings.

The 25-year-old has been named in Roy Hodgson's squad for this summer's European Championship.

I turned to the missus and said 'we're going to have to cancel the wedding'. It was a bittersweet moment

But he told BBC Radio Norfolk: "I think Joe Hart is the best goalkeeper in the world. The England shirt is his for as long as he wants it.

"Robert has been around for years and is rightly next in the pecking order."

Ruddy's call-up comes after an impressive season at Carrow Road, where he won the club's players' player of the year on the way to helping the Canaries to a respectable mid-table finish.

"For me to think 'I'm number one at Norwich so I should be number one for England' would be very naive," the former Everton and Cambridge United custodian added.

"That's not crossed my thoughts at all. I'm happy to be able to train with these guys and help them prepare for a game and pick up what I can.

"To be included in an England squad is an honour. For it to be my first squad and at a European Championship is an even bigger honour."

England begin their preparation for the tournament with a friendly against Norway on Saturday.

Ruddy will be hoping to earn his first ever cap in Oslo, especially considering he will miss the warm-up game against Belgium seven days later in order to attend his wedding.

"It's up to Roy if I play. And it's up to me to show in training that I deserve to be in there," he said.

"If I show enough to get a call I'll be absolutely delighted."

The scheduling of his wedding, which clashes with the Belgium match, had been a concern for Ruddy.

But he was told by goalkeeper coach Ray Clemence he would be given time off to complete his nuptials with partner Laura.

"That was a very nice surprise," he said.

"The first phone call I received they told me I was in the squad. I turned to the missus and said 'we're going to have to cancel the wedding'. It was a bittersweet moment.

"But then they phoned back an hour or so later and said 'we don't want you to postpone the wedding'. I'm very grateful to the FA and Roy Hodgson for allowing that."