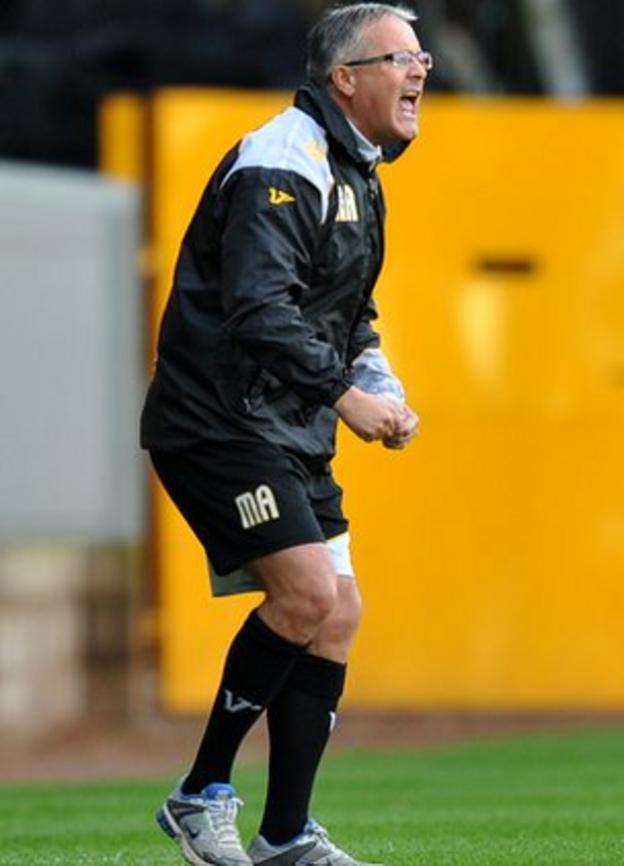 Port Vale manager Micky Adams admits that he is "in limbo" in his attempts to sign new players until prospective owner Keith Ryder has completed his takeover of the League Two club.

The latest Vale player to agree a new deal is defender Clayton McDonald.

But Adams told BBC Radio Stoke: "The problem is that under Football League regulations, we're only allowed to re-sign players contracted to the club.

"We're waiting for Mr Ryder to complete his deal, so I'm slightly in limbo."

Adams expects Ryder's plans to be sanctioned at a meeting with the Football League next week when the club hope to officially be taken out of administration.

"I understand the fans' concerns," added Adams. "They want to know about other signings.

"It's frustrating. I can talk to as many players as I want to, but getting them to sign on the dotted line is another matter.

"We're not yet permitted to sign anybody from outside the club.

I can talk to as many players as I want to, but getting them to sign on the dotted line is another matter

"And, if Mr Ryder doesn't get the green light, then our transfer embargo is effectively still on us.

"But I believe that meeting is next Wednesday. Only then will we be able to sign players."

When Vale's season ended on 5 May, midfielder Doug Loft and defenders Gareth Owen and Adam Yates were the only three players still on contracts going beyond 30 June.

Adams' chief concern now appears to be settling the future of his skipper, Preston target Marc Richards. But, while they have now have lost midfielder Anthony Griffith to Leyton Orient, they did get four in-house deals done on Monday.

Midfielder Rob Taylor signed a new two-year contract, while striker Ben Williamson, 23, who joined on a season-long loan from Hyde, and teenage keeper Sam Johnson have both signed one-year deals.

Welsh forward Lewis Haldane has been handed a six-month extension and 6ft 6ins stopper McDonald is reported to be ready to sign a one-year contract when his current deal expires on 30 June.