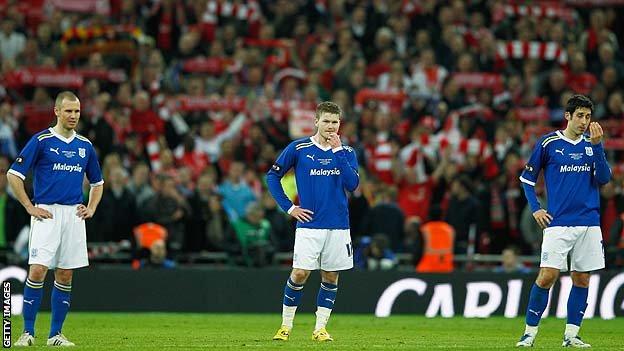 But this time they didn't see red - at least not until news leaked of a plan by Malaysian owners to ditch the traditional blue shirts as part of a huge investment plan.

No, this time the defeat in the end-of-season lottery at the hands of West Ham United was met with almost an acceptance of the inevitable.

Blackpool's triumph over the Bluebirds in the 2010 Championship play-off final was suffered with a sense of disbelief. Cardiff were the hot favourites - swept aside by a Tangerine tide.

In 2011 the failure of a star-studded squad to make automatic promotion prompted a bout of fan nervousness that ensured the semi-final humiliation by Reading was endured with resignation.

Retribution was demanded and manager Dave Jones paid for another near miss with his job.

Not surprisingly, there has been no such desire for blood this summer. This is different. The club is different. Malky Mackay is a different animal to his predecessor. 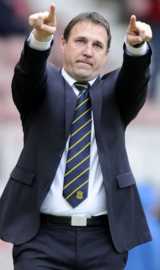 The bitter pill of a play-off exit was coated with the sweet taste of a Wembley appearance in an extraordinary Carling Cup final in February.

Liverpool triumphed in a penalty shoot-out to give Kenny Dalglish a trophy, though that proved insufficient for the Anfield legend to ensure his long-term employment.

But Cardiff, not known for attracting neutral support, won the admiration and respect of many with a heroic display before succumbing in a thrilling penalty shoot-out.

Yet, though the script had a familiar ending this has been a pleasantly surprising season for the Bluebirds.

When Mackay arrived to find just a handful of players at his disposal he had to recruit quickly, but sensibly.

A first appearance in Carling Cup final and a play-off place - competing with three former Premier League sides benefiting from parachute payments - proves he did just that.

Kenny Miller brought an attacking focal point and an early impetus with goal form which, sadly, deserted him near the end of the campaign.

Ben Turner was an excellent defensive acquisition to form a solid rear guard base alongside captain Mark Hudson, who had arguably his best season and scored one of the best goals you will ever see.

Striker Joe Mason, a virtual unknown when he arrived, blossomed nicely into one of the best young prospects outside of the top flight, with an eye for finding space in the box and a clinical approach in front of goal.

Of course, Mackay did inherit Peter Whittingham, already one of the stars of the Championship. Yet his reputation was enhanced - and as a consequence his manager's too - by his all-round game being developed.

Some maintain Cardiff blew realistic mid-season automatic promotion chances by getting distracted by the Carling Cup.

But it was not so much taking their eye off the ball but rather the number of added games that probably counted against Cardiff eventually - even though few predicted a promotion season when Mackay arrived.

To that end, their failure to recruit in numbers in the January transfer window proved costly.

And that fact will ensure Mackay, armed with a new contract after less than a season at the helm, will want to bolster his squad significantly this summer.

The unsuccessful pursuit of his former Watford striker Marvin Sordell, who chose Bolton ahead of the Bluebirds [link] in January, shows Mackay knows more pace is required in forward areas.

With Craig Conway used sporadically in the second half of the campaign, before being ruled out with injury, Cardiff too often lacked width.

But, overall the success of Reading, Southampton and West Ham United showed squad numbers of quality are required for a successful Championship campaign.

Mackay, whose connection with the fans and ability to generate team unity has already made him an immensely popular figure with the Cardiff faithful, has already proved he can spend wisely and can quickly mould a team.

Now it is over to the Malaysian owners to fully back him in the transfer market this close season - what was that about seeing red?