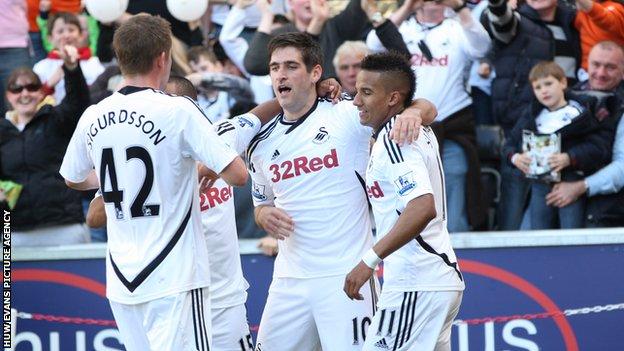 What a season for Swansea City. It says a lot about the club the Swans have become that their manager is now rejecting an approach from Liverpool to stay in south Wales.

A far cry from a decade ago when they were on the brink of extinction.

It is almost certain that Brendan Rodgers will now be linked with every top vacant post in English football management, and who could blame a club the size of Liverpool for showing an interest?

Though I am yet to find the supposed quotes of a bookie who said Elvis is more likely to be seen than the Swans staying up, it is fair to say not many gave Rodgers's side a chance of staying up in their maiden Premier League season. But they did.

They finished 11th, but swagger and style won them friends. And at the heart of that was the Northern Irishman.

"It's dreamland for where we are at in terms of our resources," Rodgers said.

"What we do have is top players - players who come in every day to work. There are no big-time egos around." 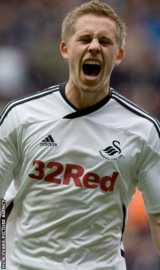 And he added: "They are players who have an inherent belief in our system and style of play.

"They defend the principles of how we play, miraculously at times"

And their principles go against the grain of most Premier League teams. Chairman Huw Jenkins heads a board of directors with significant fan representation and a clear belief in financial prudence.

But is that a realistic approach for the immediate future?

The highlight of the season? That is a tough call. The 3-2 win against Arsenal grabbed headlines and so did notable draws at home to Chelsea and Tottenham.

But it was the win against the eventual champions, Manchester City, that is favoured by most fans. Admittedly, City were below par, but take nothing away from a result that reignited the most thrilling title race in Premier League history and made Swansea City a global talking point.

Poor performances were few and far between. QPR and Blackburn Rovers away spring to mind, while they were outfoxed tactically by Norwich and Everton.

And what about their player of the season? Goodness knows what more Nathan Dyer had to do to earn an England call up.

Their Dutch goalkeeper Michel Vorm has been outstanding, fully deserving of his Euro 2012 place. Three other internationals - Ashley Williams, Joe Allen and Neil Taylor - have excelled for Wales and if you believe in stats, Leon Britton has at times this season been the best midfielder in Europe.

But it is the loan signing of Gylfi Sigurdsson that gave Swansea what they lacked most - a goalscoring attacking midfielder.

His brace at Wigan are both contenders for goal of the season. Surely, the Swans hierarchy must break their bank to secure him permanently.

Rodgers berated "lazy" journalists for assuming his team would not survive, no doubt he will brace himself for a few more lazy comments next season.

"Second season syndrome" has hit others clubs in the past. Remember Ipswich and Reading?

Rodgers himself is in no doubt that new additions will have to be made to his squad, stressing: "The most important thing is that we identify the right type of player.

"If they are available and affordable, we will then have a chance."

Swansea are thinking about long-term life in the world's richest league but even if it is short lived, the 2011-12 season will be remembered as one in which Welsh pride was taken to all the famous grounds this season.

The Max Boyce classic Hymns and Arias has rung around Old Trafford, Anfield and the Emirates Stadium.

And it will again. On and off the field, Swansea are Premier League.