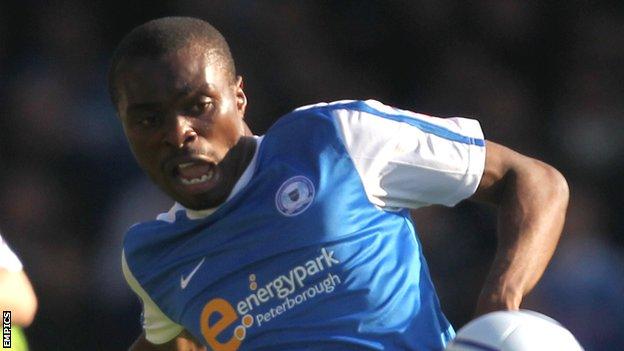 Peterborough United defender Gabby Zakuani is confident he can agree terms on a new deal at London Road.

The 25-year-old, who played the majority of last season while nursing a broken toe, has two years to run on his current contract.

"The club should see my commitment. I'm very happy here. I'll talk to the chairman face to face and see where we go from there."

I don't really question a lot of the things the gaffer does. We've lost a lot of big players in the past and we've managed to get through

Winger George Boyd and striker Paul Taylor have signalled their desire to leave the club over the summer, but Zakuani insists no such thoughts have crossed his mind.

"I'm here, playing week in, week out. Even when I'm not playing I really feel part of this team," he said.

"My family are here and are happy in the area. For me I can understand why I'm happy here.

"You never know what's going on with other people so you can't comment on them."

Zakuani is hopeful of avoiding surgery on the foot injury that plagued him throughout the season and required pain-killing injections to see him through games.

Instead a summer of rest should enable him to return to action fully fit after the summer.

But the Posh squad could look very different come pre-season, with a number of players told they are surplus to requirements by boss Darren Ferguson,

"I don't really question a lot of the things the gaffer does," said the former Fulham and Leyton Orient centre-half.

"We've lost a lot of big players in the past and we've managed to get through.

"The gaffer knows what he's doing and his thinking behind it. It's still hard to believe a lot of the players on the [transfer list] but there must be a big plan for the new season."