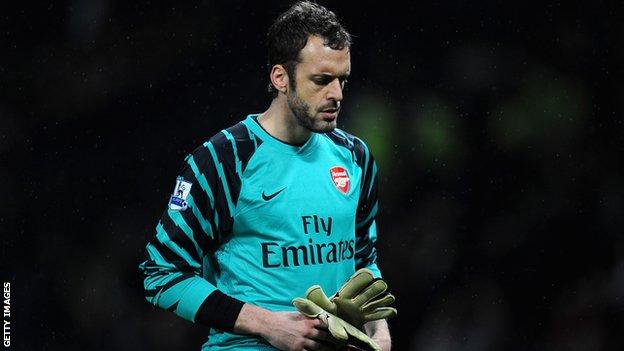 Manuel Almunia is among seven players who have been told by Arsenal that they will be released when their contracts expire on 30 June.

The Spanish keeper, who played in the 2006 Champions League final against Barcelona, failed to make an appearance for the club during the 2011-12 season.

Defender Gavin Hoyte, 21, has also been released after one league appearance.

Almunia, 35, played for 70 minutes in Arsenal's 2-1 defeat to Barcelona in the 2006 Champions League final after Jens Lehmann was sent off for bringing down Samuel Eto'o.

He spent part of the 2011-12 season on loan at West Ham after Hammers manager Sam Allardyce discovered Robert Green faced several weeks out with a knee cartilage injury.

"Everyone at Arsenal would like to take this opportunity to thank Manuel, George, Gavin, Sean, Rhys, James and Jeffrey for their contribution towards the club and wish them well in their future careers," said a statement on the Arsenal website.