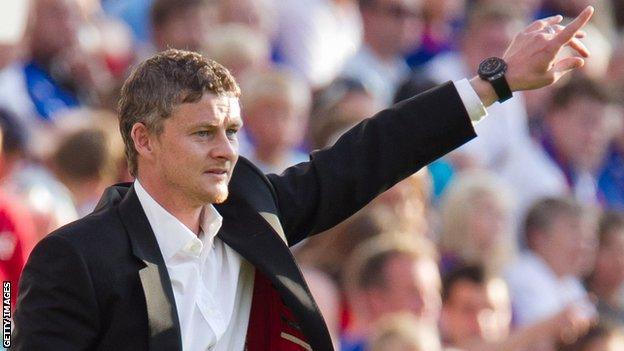 Ole Gunnar Solskjaer has pulled out of the running to be the next Aston Villa manager.

The 39-year-old Molde coach had talks with Villa on Friday about succeeding Alex McLeish, who was sacked on 14 May.

"Solskjaer wants to stay in Norway with Molde, living in his home town and not disrupting his family. He wasn't offered the job by Villa although he impressed Randy Lerner in talks on Friday. Villa are understood to be sympathetic and not devastated and Lerner is relaxed about the process."

But it emerged on Tuesday that the former Manchester United striker no longer wants to be considered.

Villa are sympathetic to Solskjaer's reluctance to uproot his family and owner Randy Lerner will continue to consider other candidates.

"I had a very open, honest and very nice dialogue with Mr Lerner and he really understood my decision. He was really understanding," said Solskjaer at a news conference on Wednesday.

Chief executive Paul Faulkner insisted last week that there is no time-frame for the appointment.

Former Manchester United reserve coach Solskjaer had been the strong favourite for the role after last week's talks became public.

"I have said for a long time that I have ambitions to be a Premier League manager, but I haven't been chasing after any jobs," Solskjaer, who led Molde to their first league title last year, told the Norwegian press over the weekend.

"It's up to Aston Villa now. I have only had a chat with them and expect them to speak to other candidates."

Norwegian media report that Solskjaer will take part in a press conference from 1600 BST on Wednesday, along with Molde owner Kjell Inge Rokke.