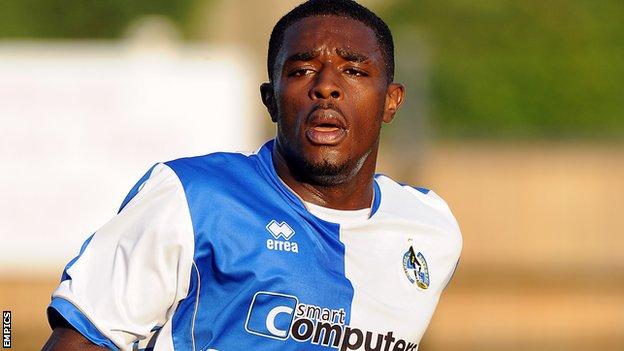 Bristol Rovers have rejected a six-figure bid for winger Mustapha Carayol from an unnamed club.

The Pirates had previously rejected an offer for the highly-rated 22-year-old from Championship side Barnsley.

"As far as I'm concerned the price has come nowhere near the value Muzzy has," Rovers manager Mark McGhee told BBC Radio Bristol.

"We have to respect his career but as a club we are entitled to achieve the value that we should be getting."

Carayol, who can play on either wing, is in his first term with the League Two side and has scored six goals in 35 appearances.

He is under contract until the end of next season and the club were in talks with the former Lincoln midfielder to keep him at the Memorial Stadium.

McGhee admits he is not surprised by the interest and says the side will have to fight to secure his services beyond next year.

"Muzzy is still a young player with a lot more to come," added the Scotsman.

"I'm hoping that no one will come for him but I think that's unrealistic.

"We're not going to get in the way of his career progress and I think we have to be fair to him.

"I hope he's still here at the start of the season but that remains to be seen. Nonetheless, we still hope to have a successful season with or without Muzzy."