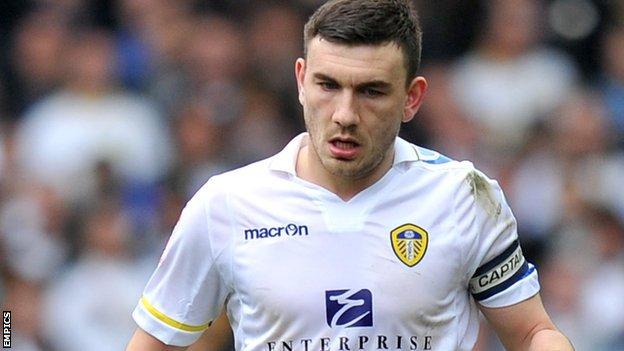 Leeds United boss Neil Warnock has been trying to persuade captain Robert Snodgrass to stay at the club.

The Scotland international has been linked with a move away from Elland Road and has just one year left on his current deal.

"I want to keep him. He knows what I think about him," Warnock told BBC Radio Sheffield.

"I've said to him to sign another year and, if at Christmas we've no chance of going up, I'll sell you then."

He added: "I understand that he's frustrated because all of the midfielders he was playing alongside last season have left the club.

"I think he's just going to wait and see who we sign and see how the situation develops and I don't blame him for that."

Warnock is also unsure about the future of top scorer Ross McCormack, who is out of contract from the end of June.

"We've offered him a new contract and it isn't sufficient to what his advisors think he should get," he continued.

"That's fine, he got 19 goals for us this season but what we've said is we can't go that far. That doesn't mean he's going to go though."

The former Queens Park Rangers boss took over at Elland Road in February following the sacking of Simon Grayson.

Having seen his side's play-off bid falter this season he is now looking to mount a challenge for what would be his eighth promotion as a manager.

"It's not been easy so far, it's a massive club," he concluded.

"It's a challenge now to get a squad together that is capable of winning promotion and I want a shot at achieving that.

"Only time will tell if I'm going to get the backing that allows me to do that. I'm trying to get one or two players signed up sooner rather than later."