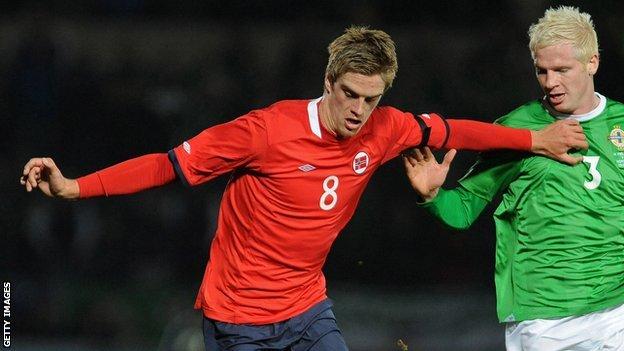 Celtic manager Neil Lennon has confirmed his interest in Rosenborg midfielder Markus Henriksen but there has been no contact between the clubs.

Lennon revealed Celtic must release players before recruiting others.

"We have not made any contact with the club yet but he is a player we admire," Lennon said after the 2-0 defeat by Norwich in Adam Drury's testimonial.

"We do like the player, but I do not know if we will be able to get a bid going in the next few days or not."

Henriksen, 19, has played six times for Norway, having become a Rosenborg regular in 2010.

"We have got a bit of work to do with trimming the squad before we can possibly even think about bringing players in, but we have targets for three or four positions," added Lennon.

"We are pretty happy with the nucleus of the squad we have, there are some talented young players and against Norwich you saw a glimpse of some of the ones just bubbling under who can play in a pretty good environment.

"The club is in a good state at the minute, but we would like to bring two or three bits of quality in to add to that."