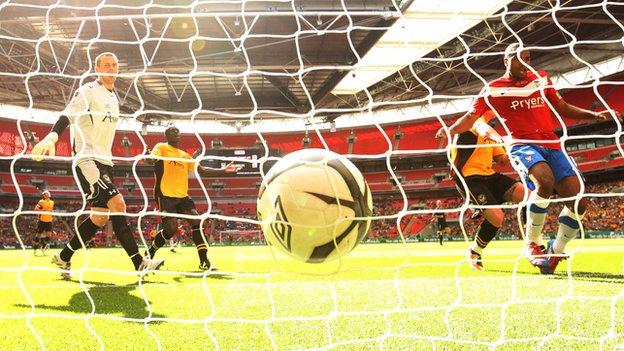 And then there were three.

Newport County capped a season of contrasts by becoming the third Welsh club to play at the new Wembley Stadium - all in a calendar year. Extraordinary stuff.

The home of English football was by no means full for the FA Trophy final. County could do nothing to stop opponents York City lifting the cup - the first of two Wembley triumphs in a week for the Minstermen who ensured Football League status a week later with another victory under the arch.

But none of the 13,000 or so County fans who made the trip to north London will ever forget the day Justin Edinburgh and his men stepped out onto the hallowed turf.

For it was more than just a culmination of an enjoyable cup run. It was a worthy tribute and a day that signified achievement for all those who had worked so hard to ensure Newport County rose from the ashes after the club went out of business more than 20 years ago.

The existence of Newport County has been a constant challenge taken on by a devoted group of driven fans.

They shrugged off the old County's stock being sold off at an auction, they endured the numerous legal battles to ensure a new club got off the ground and they diligently put in the miles, forced to live the nomadic existence of a club in exile.

Few would probably want to tally up the financial cost over the years.

Wembley was for them as much as the players. Despite the result, it was an unforgettable end to a campaign in which they also had much to endure.

County started the season with Anthony Hudson in charge. For all his coaching credentials, enthusiasm and confidence, he just could not deliver victories.

After one win in the opening 12 League games, the County board - who, apparently, were never unanimous in wanting Hudson to succeed Dean Holdsworth - decided on change at the top.

They went for Edinburgh - a man who spent most of his playing career at Spurs but then built up a good reputation as a manager in the non-League scene.

His first game in charge was a 3-0 Conference defeat at home to Southport, watched by then Wales manager Gary Speed.

Speed's letter of best wishes still has pride of place in Edinburgh's office. They both realised Edinburgh had inherited a huge task.

Yet within days County pulled off an astonishing 4-1 victory away to the eventual runaway champions Fleetwood Town - hope for the future.

The quest for survival really gained pace when Edinburgh was able to administer major surgery in the January transfer window.

He brought in significantly stronger players to add steel to his team and with that base County also looked more likely to score goals. Sam Foley was back in the groove, David Pipe a driving force.

In the end, County achieved their primary aim of ensuring Conference football with six points to spare.

Edinburgh has already started the job of building for a less fraught Conference campaign next season.

Finances are always the key, but he has shown an eye for a player and he is excited by the development of youngster Lee Evans.

Edinburgh is a determined character whose man management would appear exemplary. Crucially, he knows his way around the non-League scene and knows which players are appropriate for the Conference.

The long toiling fans of Newport County will surely look to next season with optimism.

And despite a tough Conference campaign, they will never forget last season and the day Newport County played at Wembley.