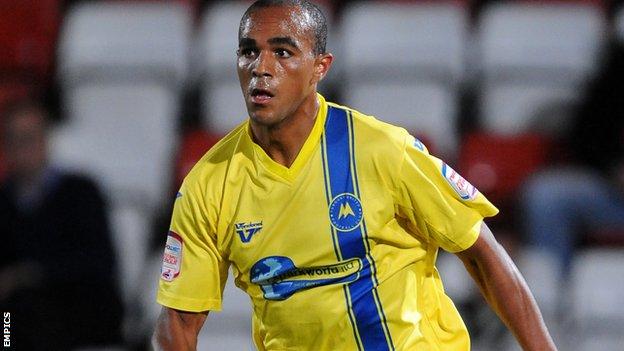 Kenya striker Taiwo Atieno is set to leave Torquay United after not being offered a new deal.

Atieno, 26, has scored seven goals since moving to Plainmoor last summer but was mainly used as a substitute.

With the Gulls offering Walsall loanee Ryan Jarvis a full-time deal, Atieno has been forced to look for a new club.

"I feel I've had the peak of Tai, but not the peak of Ryan Jarvis and I feel the peak of Jarvis will be better," manager Martin Ling said.

"I only had the money to keep one of the two and that was the big issue.

"It comes down to a financial issue and you can't keep everybody, " Ling added to the club website.

Former Stevenage striker Atieno found his starting chances limited thanks to the form of Rene Howe and went four months without a goal between August and December.

He did manage a goal on what proved to be his Gulls swan-song as he headed home Eunan O'Kane's corner late on in Torquay's 2-1 League Two play-off second leg loss to Cheltenham Town.