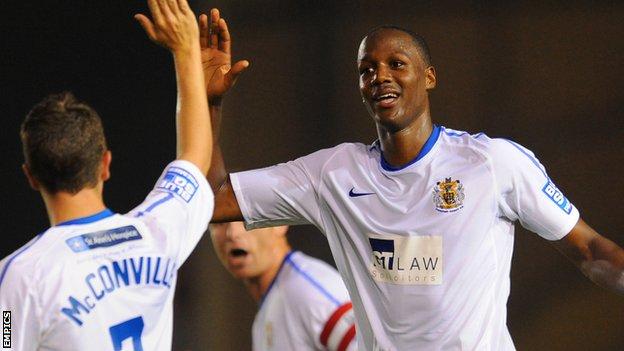 Cambridge United have signed striker Tom Elliott on a two-year deal after he turned down the offer a new contract at Stockport County.

The 22-year-old joined the Hatters from Hamilton last summer and went on to score seven times in 41 Blue Square Bet Premier appearances.

"I think I can help Cambridge back into the Football League," the former Leeds forward told BBC Radio Cambridgeshire.

"On a personal level I want to score 15 goals next season."

Elliott was handed his senior debut at the age of 16, coming on for Leeds in a 2-1 Championship defeat at Norwich City.

He played three more times for United before spending six months north of the border with Hamilton.

"We know that Tom is not a proven goalscorer at this level and that he has only had one season in our league, but he has some fantastic attributes that will give us an added dimension in attack," said U's boss Jez George.

Stockport manager Jim Gannon added: "I'm a little disappointed to have lost Tom, we had done everything in our powers to ensure he stayed.

"We offered him a contract back in early March with a substantial rise in wages and additional financial benefits, but unfortunately he chose to run his contract down and sign for another team.

"Despite our tight financial circumstances we offered Tom a very good deal and more importantly football wise I felt we offered him the perfect environment to further enhance himself."