Croatia knew three points in Poznan would clinch their last-eight spot following an impressive opening 3-1 win against Republic of Ireland. 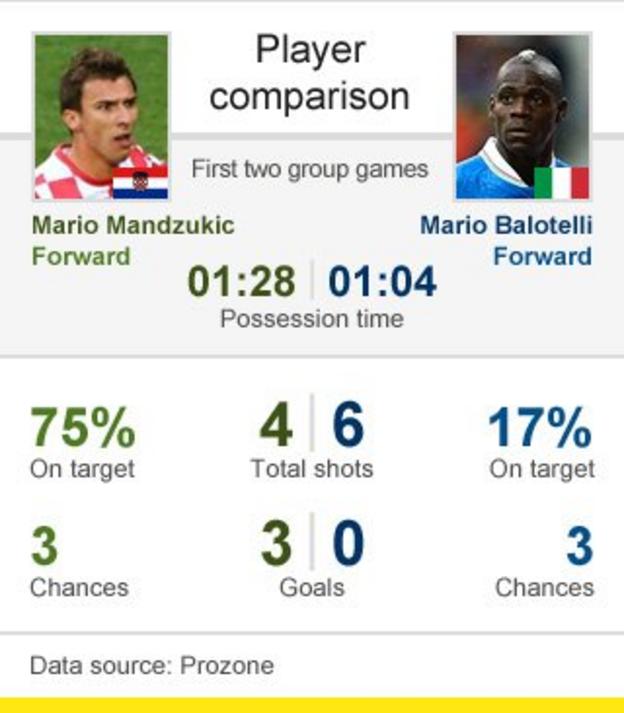 The Italians appeared in total control after taking the lead through Andrea Pirlo's wonderful first-half free-kick.

But Mandzukic's third Euro 2012 goal means the Italians may now need a big win over Ireland to progress.

That will depend to an extent on Spain's fortunes against the Irish in the group's evening kick-off.

For their part, Croatia appeared happy with a point after struggling to match a slick Italian side who dominated the first half thanks to a midfield masterclass from the evergreen Pirlo.

Much of the pre-match talk had centred on the midfield battle between veteran Juventus star Pirlo and his Croatia counterpart Luka Modric. But the Tottenham playmaker failed to match Pirlo, who dictated the game and set up waves of Italian counter-attacks.

Italy coach Cesare Prandelli had stuck with the 3-5-2 formation used against Spain, which meant no room in his starting XI for Sunday's goalscoring substitute Antonio Di Natale.

"If, at the end of this game, Italy find themselves with just two points from two games they really have just got themselves to blame. They go a goal up and their natural thing is to sit back. You can't depend on that and expect teams never to score against you."

Instead Mario Balotelli retained his place, and he was heavily involved in the early stages as Italy settled quickly.

The Manchester City striker had a trio of golden opportunities before the quarter-hour mark but failed to beat Stipe Pletikosa in the Croatia goal after slightly hesitating on each occasion.

Fittingly, it was the 33-year-old Pirlo who opened the scoring, his free-kick dipping over the Croatian wall and past a helpless Pletikosa from 20 yards.

But Italy seemed to run out of energy in the final third of the match as Slavan Bilic's men upped the tempo in search of an equaliser.

Croatia are the tallest squad in Euro 2012, with an average height of 6ft 1in, and they looked to use their aerial advantage, full-backs Ivan Strinic and Darijo Srna pressing forward to supply crosses for strikers Nikica Jelavic and Mandzukic.

And it was a pinpoint Strinic delivery that enabled Mandzukic to control before firing into the roof of Gianluigi Buffon's net off the post.

Ultimately Italy, who had failed to win their second group match in each of their last five tournaments, paid the price for not making their early dominance count.