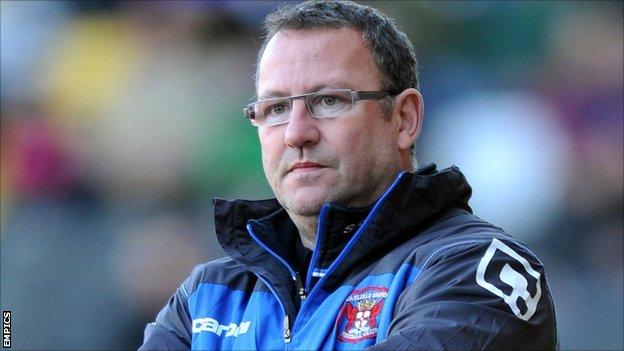 Carlisle United manager Greg Abbott has said the club will continue to live within its means with regard to summer squad strengthening.

The Cumbrians finished just outside the League One play-offs last season, but unlike the previous two seasons did not enjoy a lucrative Wembley cup-run.

"We can't spend more than what comes in," Abbott told BBC Radio Cumbria.

"If we can generate more through gates, through player sales and cup runs I hope I will be given a bit more back."

Abbott added: "The club has to run as a business."

United have issued contract offers to eight players but are yet to tie up deals for players so far this post-season.

In addition Abbott has been preparing contingency measures should those professionals turn down the opportunity to remain at Brunton Park.

"I've spoken to four players face to face across the table, so I'm doing pretty well.

"I'm in good shape with people we're chasing, but I don't want to be tied down.

"There might be some people thrown at us later on who can't find clubs, so it's hard to predict figures of how many players we need."

Among the players linked with a move to the club is former loanee Jordan Cook, who was released by Sunderland earlier this month

"I'm not going to make comments about individuals, the only reason we're talking about Jordan is he was on loan here last season."