Andriy Shevchenko was the hero for co-hosts Ukraine as they came from behind to beat Sweden and go top of Group D.

The 35-year-old scored two headers in the space of six minutes to turn the game in his side's favour after Zlatan Ibrahimovic had given Sweden a second-half lead.

The Swedes applied a lot of late pressure in search of an equaliser.

"Shevchenko is past his best - we all know that. But going further back into his career he scored some fantastic headed goals. I don't know the man but I'm pleased for him and the Ukrainian people. Watching the game in Donetsk you could see the enjoyment on the faces of families here that 'we've won'. It's a fantastic experience to be part of."

But the home nation and their talismanic striker were not to be denied an important opening win.

Regardless of what Shevchenko achieves at this tournament his status as a legendary figure in Ukrainian football is secure, following a near 15-year international career that has seen him average close to a goal every two games in 108 caps.

There were suggestions that the 35-year-old would not even be included in Oleg Blokhin's squad as the coach looked to usher in a new, exciting generation of Ukrainian players, with the 59-year-old former Soviet Union international stating that "names do not play football... if they did, I could be playing now".

Blokhin will be thankful now that he gambled on including the aging forward for what is to be the player's final international tournament. 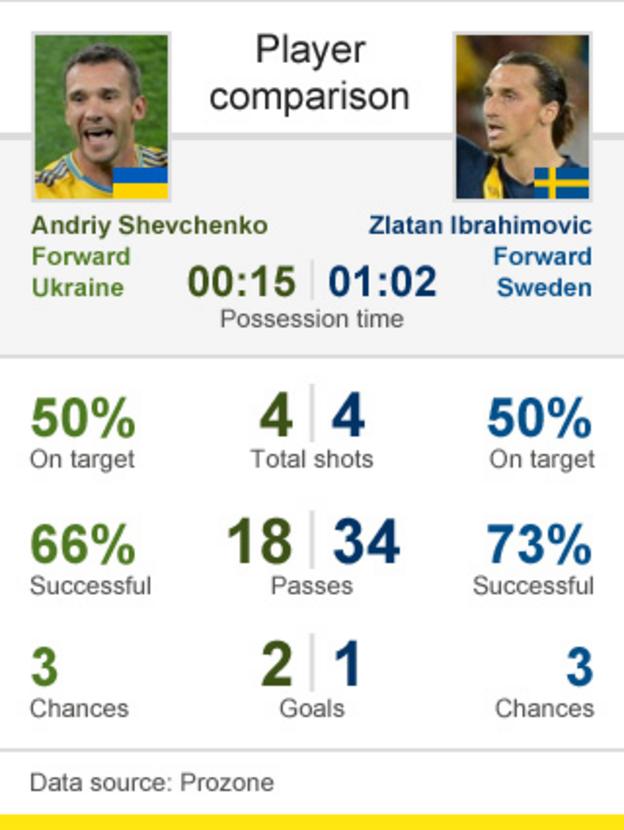 The lightning pace that saw Shevchenko terrorise defences during his first spell with Dynamo Kiev and in a free-scoring career with AC Milan in Italy may be gone as a result of age and a succession of injuries, but his mind remains sharp.

It was this that helped him score his 47th and 48th international goals. It is hard to imagine any of the previous 46 were as important.

He was a largely peripheral figure during a first half that the Ukraine had the better of, barring one glorious opening that saw him get in behind the Sweden back-line on the right but drag his shot from 10 yards wide of the far post.

The heat was perhaps taken off him by the fact that the highly rated Yevhen Konoplyanka was even more wasteful for the home side, spurning a trio of decent chances, the best of which saw him volley over at the back post with the goal seemingly at his mercy.

However, in a six-minute burst either side of the hour mark, Shevchenko reaffirmed his legendary status to convert a one-goal deficit into a one-goal lead.

Seven minutes into the second half, Sweden's own talismanic forward Ibrahimovic had made up for hitting a post with a clear close-range header in the first period by giving his side the lead, slotting in from six yards out following a neat low cross from Kim Kallstrom.

However, just moments later, Shevchenko got ahead of marker Olof Mellberg to head home Andriy Yarmolenko's cross and send the Olympic Stadium wild.

These celebrations were nothing, though, compared to what was to come when the Dynamo Kiev striker's superb movement again bought him space, this time at the near post, to glance in a header from a corner.

With defeat staring them in the face, Sweden pushed forward for a leveller.

Ibrahimovic came close with a stinging drive from the edge of the box, which Andriy Pyatov did well to save, admittedly with a touch of fortune, and substitute Johan Elmander spurned a glorious opportunity by blazing wide from a superb position in the box.

Finally, Mellberg came within inches of breaking home hearts with a volley at the back post that landed on the roof of the net.

Soon after that, the final whistle blew to send the Olympic Stadium into raptures once again.

Shevchenko had already left the field 10 minutes earlier to a standing ovation. He had earned it.