France secured their first Group D win at Euro 2012 at the expense of co-hosts Ukraine during a rain-interrupted spectacle in Donetsk.

The teams were forced off after only four minutes because of the stormy conditions, returning almost an hour after the scheduled start.

Jeremy Menez opened the scoring in the second half when he drifted inside his marker and fired in from 12 yards. 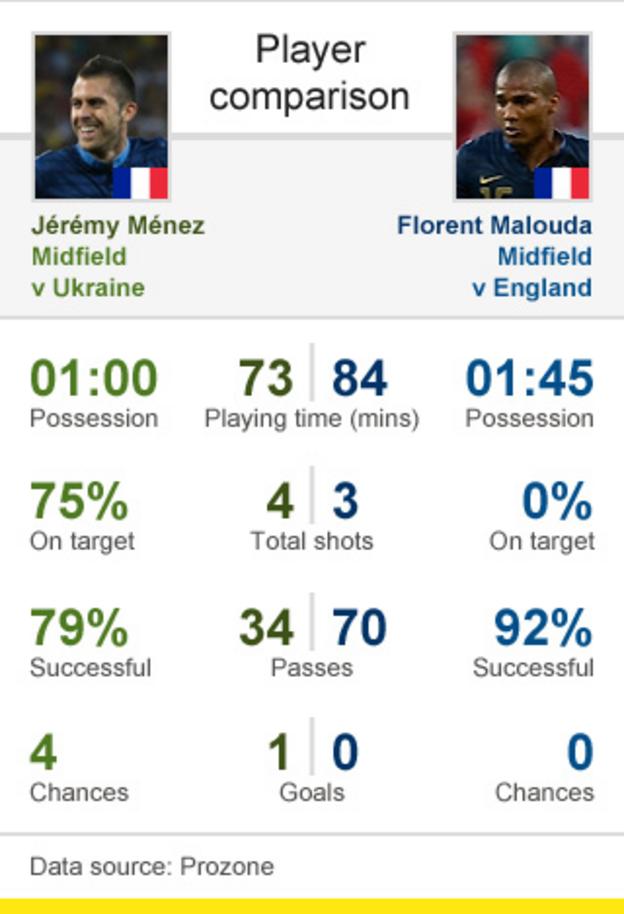 Yohan Cabaye added a second with a low strike from the edge of the area.

It was the Newcastle midfielder's first international goal, secured as he moved into an advanced position and took advantage of a Ukraine defence that laboured in the heat and soggy conditions inside the Donbass Arena.

The energy-sapping pitch was created by the deluge early in the first half that led to referee Bjorn Kuipers taking the teams off.

The Dutchman was unconcerned by the rain at kick-off but by the fourth minute the downpour had intensified and heavy lightning overhead meant the official had little option but to haul the players off the pitch.

Despite the storm subsiding 20 minutes later, there remained a doubt about whether the rest of the match would be completed on Friday because of the surface water, with rain having poured in torrents out of the stands.

However, following emergency drainage work by the groundstaff, Kuipers gave the go-ahead for the game to restart.

It took a few minutes for the players to become accustomed to the new playing conditions, and it was the nimble French attack that was first to settle.

They provided the best goalmouth action in the first half, with Menez, Karim Benzema and Franck Ribery showing the most intent.

Paris St Germain winger Menez actually had the ball in the net but it was rightly ruled offside, while Benzema also tested Andriy Pyatov with a rising stinging shot and a low drive.

It was centre-back Philippe Mexes who had the clearest chance of the first 45 minutes when his powerful header from a corner had to be pushed away by Pyatov.

But Bayern Munich's Ribery, impressive in the pre-tournament friendlies, was the French star in Donetsk, and it was his wizardry that eventually found Menez on the right of the area.

The winger picking up the pass before shifting inside Yevhen Selin and firing low inside the left-hand post.

The second goal came three minutes later and this time Benzema was the creator. The Real Madrid forward fed Cabaye on the edge of the 18-yard area and he escaped his marker Oleg Gusev before firing in a low shot.

"Sometimes you criticise teams who employ two holding midfielders. But one of France's is Cabaye and he's an all-round midfielder, who sits when he has to sit and gets forward too. It works well for them."

Moments later Cabaye was fractions away from adding a second but his rasping drive, following sustained France pressure, rattled the left-hand post.

Ukraine's game relied on long balls into space for Andriy Shevchenko and Andriy Yarmolenko to chase.

Shevchenko, the hero of the opening match against Sweden, went closest with two efforts. The first was a fierce angled drive that Hugo Lloris palmed away and the second, after the break, was an arrowed shot that flew just a foot over the bar.

Apart from that there was little to enthuse the largely partisan crowd inside the Ukraine stadium. The loud roars of delight that must have heartened their team when they drove forward earlier in the game had turned to whistles of disgust by the end of the match.

The co-hosts have a chance to make amends when they face England in Tuesday's Group D decider, with France up against Sweden in Kiev.