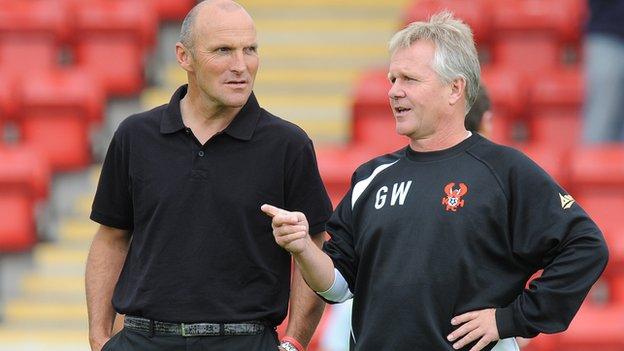 After guiding the Harriers to a second-successive sixth-place Blue Square Bet Premier finish, Whild insists they have unfinished business at Aggborough.

"We're disappointed that we finished sixth and we just want to get in the play-offs or do even better."

He added: "If you're doing that and you're playing well, then you will get that interest, whether you are a manager or a player.

"But we like the club. It is a good club in the Conference."

Look at the clubs who have come down in the last two seasons - the likes of Darlington, Stockport, Lincoln and Grimsby - none of them have finished in the top six

The Harriers management team have won many admirers for both their style of football and also for their achievement in being in contention for the play-offs with a limited budget.

But Whild feels that there is more to come from both themselves and their squad.

"As much as you can look back and think, 'we have done well again', there is a big disappointment in Steve and myself that we have finished sixth again," he admitted.

"We will be determined this season to hopefully push on and change that.

"You can look at the clubs who have come down in the last two seasons - the likes of Darlington, Stockport, Lincoln and Grimsby - and none of them have finished in the top six.

"That probably tells you how tough a league it is. We have even seen some of them struggling down at the bottom on occasions.

"If they are not sure what to expect then it is a very tough league."

Meanwhile Dave Hankin, who was out of contract, has opted to join Blue Square Bet North newcomers Chester and Jack Cresswell has been released, but talks are ongoing with a number of other members of last season's squad.