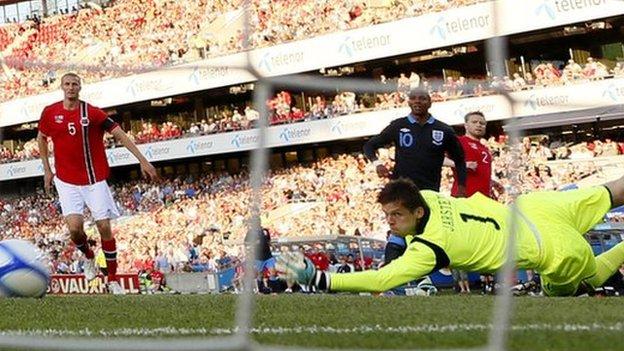 Roy Hodgson's reign as England manager began in Oslo's Ullevaal Stadium with a first win against Norway in 32 years.

Ashley Young's early goal provided the decisive moment of a low-key friendly that turned into an audition for several of Hodgson's shadow squad as he formulates his final plans for Euro 2012 after replacing Fabio Capello.

England showed early signs of the tactical discipline that will be demanded by Hodgson. And while the performance hardly set pulses racing, it should be remembered that the side that starts the serious action against France in Donestsk on 11 June will not resemble the one on show in Oslo.

"It was a warm-up, Roy's first game, and a 1-0 win. That's what it will say in the record books. Without trying to be cynical this is a reserve team. You know when it comes to the first game your team is going to be totally different. Roy took the opportunity of looking at as many players as possible as soon as possible."

Hodgson also has Wayne Rooney to call on once he has served a two-match suspension at the start of the tournament - and it is abundantly clear England will rely as heavily as ever on his ability to shape the outcome of important games.

If Hodgson was looking for early evidence of what he must improve before the tournament gets under way in Poland and Ukraine, it was carelessness in possession - especially in the second half - that will not go unpunished against opposition superior to Norway.

Hodgson was able to introduce Arsenal teenager Alex Oxlade-Chamberlain for his debut late on as this makeshift England line-up closed out a victory that was solid for the most part without ever threatening to be spectacular.

There was also an injury scare for Hodgson as midfielder Gareth Barry, who was substituted after replacing captain Steven Gerrard at the start of the second half, was replaced by Liverpool's Jordan Henderson with 17 minutes left.

Hodgson admitted there would be an early element of experimentation about England's side, with his focus firmly on that opening Euro 2012 meeting with France, perhaps even above getting a victory in Norway.

He would still have been looking for encouraging signs, however, especially from striker Andy Carroll. The Liverpool forward's presence has taken on increasing importance with Rooney suspended and Danny Welbeck's ankle injury still a source of concern.

And Carroll provided a hint of what Hodgson was looking for in the opening minutes as he sent a header wide from Stewart Downing's cross before playing a role in Young's fine individual effort after nine minutes.

England's formation was a rigid 4-4-2 against a Norway side of surprisingly limited ambition and on one of the rare occasions James Milner got in the action he forced a save from Jarstein.

Gerrard had been loudly cheered before kick-off as a result of Liverpool's large Norwegian following - but he was being jeered as the villain by the time he ended his 45-minute appearance after a heavy challenge that resulted in Tom Hogli being replaced by Espen Ruud.

Shane Long ensured the Republic of Ireland will head off on their Euro 2012 adventure on the back of a win with the only goal against Bosnia-Hercegovina. Arsenal's Per Mertesacker had a painful return to action as Germany suffered a 5-3 defeat by Switzerland - their first loss to their neighbours in 56 years. Netherlands also suffered a shock defeat, 2-1 at home to Bulgaria. But Spain, without their Barcelona players, eased to a 2-0 victory over Serbia.

The second half was a scrappy affair, not helped by the disruption of substitutions. Oxlade-Chamberlain was given his England debut late on in place of Young, while Henderson came on for Barry.

England's failure to retain the ball inevitably encouraged Norwegian pressure and keeper Robert Green needed to be alert to block John Arne Riise's powerful drive at his near post.

As the game drew to a muted conclusion, there was even time for Liverpool defender Martin Kelly, who did not make England's standby list for Euro 2012, to get his first cap as an 87th-minute substitute.

It underlined the experimental nature of this fixture, a fact acknowledged by Hodgson as he began his tenure with victory.