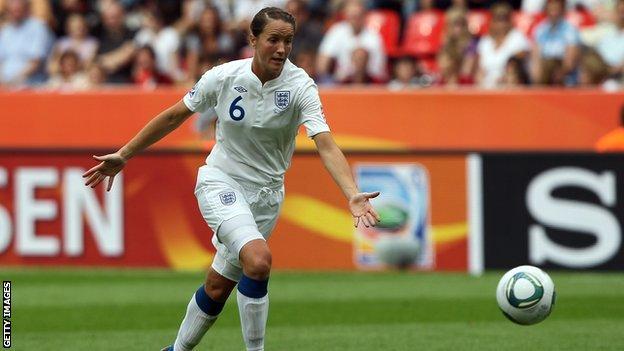 Lincoln defender Stoney, 30, will take over against Netherlands on 17 June, having already earned 101 caps.

"It's an absolute honour, the biggest privilege I've ever been given," said Stoney, who was disappointed not to play at the 2005 European Championship.

"At the time I was actually thinking of giving up on international football. I'm so glad I stuck with it."

Arsenal centre-back White retired from England after announcing her pregnancy in April.

But even though Stoney was already vice-captain and has worn the captain's armband in most of England's Euro 2013 qualifiers, the news still came as a surprise.

"I didn't assume that I was going to be the official captain," Stoney told BBC Sport. "But I got a call from [England coach] Hope Powell on Wednesday and she gave me the great news. Now I've got to focus on being the best captain I can be.

"It's a big role but one I'm relishing and looking forward to."

On her consideration about retirement after failing to play at all during Euro 2005 in England, Stoney added: "I had a good chat with my manager at the time and my parents and they said, 'this is what you love, this is what you do'.

"To be fair, Hope has given me opportunities that have allowed me to do this. She has stuck by me when I haven't been great and it's paying off now. It's taken a lot of hard work to get there.

Powell added: "Casey is very much in the same mould as Faye.

"She is very professional, she has a great attitude, she is not afraid to work at her game and she leads by example both on and off the pitch, so I'm delighted for her.

"She is an intelligent footballer, very bright, understands the game and she is great to have around, so, for me, she is the right choice."

Powell also named her squad for the crucial Euro 2013 qualifiers against Netherlands in Salford and Slovenia on 21 June.

There is a recall for Rachel Yankey, who could equal Gillian Coulthard's record of 119 caps, if she plays in both games.

Defenders Stoney, Sophie Bradley and Claire Rafferty also return to the squad after injury, while there is a first senior call up for Everton forward Toni Duggan.

Powell's team are five points behind the Dutch, who are the group leaders, with three game remaining.

Should they finish second, England will face a play-off in order to qualify for next summer's European Championship in Sweden.