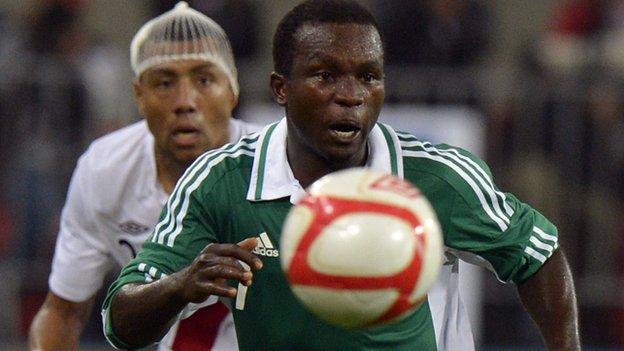 Nigeria suffered a 1-0 defeat in Peru as the Super Eagles continued their preparations for next month's 2014 World Cup qualifiers.

The hosts won the game in the Peruvian capital Lima as Paolo Guerrero drilled home after 36 minutes following a flowing counter-attack.

Kalu Uche scrambled a shot against the post late in the first half, but Peru enjoyed the better chances after that.

In another friendly on Wednesday evening, Botswana put a chaotic build-up ahead of June's competitive fixtures to one side as they beat Lesotho 3-0 at home.

Joel Mogorosi opened the scoring before Mara Moloi doubled the lead to give the Zebras a 2-0 half-time advantage.

In the second period, Jerome Ramathlakwana sealed the win to relieve some of the frustrations in the Botswana camp.

Earlier this week, the squad were only able to train for 15 minutes on Monday, before being forced to share a pitch on Tuesday, after Botswana's FA failed to pay for local training pitches.

A team that made its debut at this year's Africa Cup of Nations in Equatorial Guinea and Gabon take on Central African Republic on 2-3 June, before hosting South Africa a week later.

Sierra Leone were also in action on Wednesday, losing 1-0 to Iraq in Istanbul following Nashat Akram's winner in the fourth minute.

The Leone Stars host Cape Verde next month before travelling to Equatorial Guinea for their second Group B encounter.

On Tuesday, Egypt beat Togo 3-0 in Sudan thanks to a brace from Mohamed Salah and a strike from Mohamed 'Gedo' Nagy, to follow on from the Pharaohs' 2-1 defeat of Cameroon on Sunday.