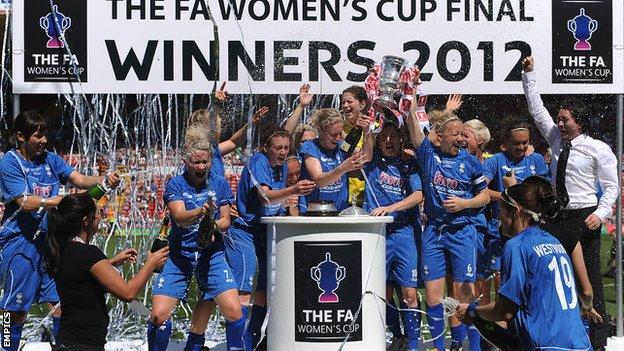 Birmingham City won the FA Women's Cup final in a dramatic penalty shoot-out after twice coming from behind in a game that either side could have won by the end of extra time.

Striker Helen Lander gave Chelsea a 70th-minute lead that was cancelled out by striker Rachel Williams in the first minute of stoppage time.

For Birmingham, who like Chelsea were making their FA Women's Cup final debut, it was the first major trophy lifted in the 44-year history of the club.

Manager David Parker said: "After a fantastic journey and so many trials and tribulations for the club, it's amazing to have our first piece of silverware."

And Birmingham born Carney, back with her first club after spells with Arsenal and in America, said: "It's unbelievable, we've worked so many years for this.

"I'm delighted on a personal level but it's not about me, it's about the squad and the staff and the whole of the Birmingham City family."

Losing manager Matt Beard said: "No-one expected us to get to the final so it was a great achievement just to get here.

"But I'm so disappointed for the girls, because I thought we deserved to win the game and it was a horrible way to lose it."

Striker Jodie Taylor and right winger Karen Carney both went close to putting the midlander's in front as they maintained their early pressure.

But in a breakaway Chelsea attack Lander drove in an 18-yard shot that was brilliantly saved by the diving Rebecca Spencer.

Birmingham were quickly back on the offensive for Taylor and central defender Emily Westwood to send efforts narrowly wide.

In another counter attack before the interval, however, Lander got in behind the defence to this time hit the near post from 12 yards.

The Londoners were more offensive in the second half and got their rewarded when Lander broke the deadlock with a 12-yard shot into the top corner of the net.

But Birmingham hit back hard, both Carney and Taylor having goal-bound efforts stopped on the line in the closing stages.

Extra time was a torrid affair as both sides went all out for a winner, and it defensive errors that led to each team's goal.

Longhurst fired in a 15-yard cross-shot after a mix-up between right back Chelsea Weston and central defender Laura Bassett.

And Carney equalised with a curling 20-yard free-kick as the Chelsea players were still trying to organise their defensive wall.

Beard and his players complained that referee Natalie Walker had not communicated to them that she had given Birmingham the nod to take the free-kick.

But the goal stood, and when the game went to penalties Carney struck home her spot-kick before Chelsea central defender Gemma Bonner missed the target to hand the Cup to Birmingham with a 3-2 shoot-out victory.

Parker said: "The turning point was our first equaliser. I thought, 'someone's looking down on us' when the ball went in.

"I felt from that point that we would win the game - but in the end it was a bit too close for comfort!"