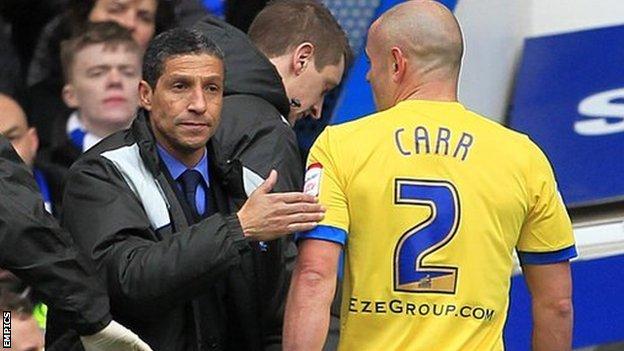 Birmingham City's veteran full-back Stephen Carr could yet carry on playing - more than three years after coming out of retirement.

The ex-Ireland international, 35, quit in December 2008 after being released by Newcastle but was talked into playing again two months later by then Blues boss Alex McLeish.

He has since gone on to make 120 appearances and wants to carry on.

But he is still not clear whether he will be asked to stop on at Blues.

And the situation is not helped by the delay in Blues' Hong Kong-based holding company filing the club's financial results for the year to 30 June, 2011.

There's a lot of ifs and buts, with what's going on at the club and in Hong Kong

"I haven't been offered anything and I don't know if I will be," Carr told the Birmingham Mail.

"We've spoken about it, but there's no news. I'm still waiting to see what's going to happen.

"There's a lot of ifs and buts, with what's going on at the club and in Hong Kong."

The 44-times-capped right-back has not featured since Birmingham's 1-1 FA Cup fourth round-draw against eventual winners Chelsea at Stamford Bridge in February.

But he still thinks he could have another couple of seasons left in him.

And, with financially-troubled Blues still under a transfer embargo and not allowed to sign anyone other than already contracted players, boss Chris Hughton may be reluctant to let any more go.

After signing up left-back David Murphy on a two-year deal, Hughton is in discussions with both Carling Cup-winning captain Carr and keeper Colin Doyle.