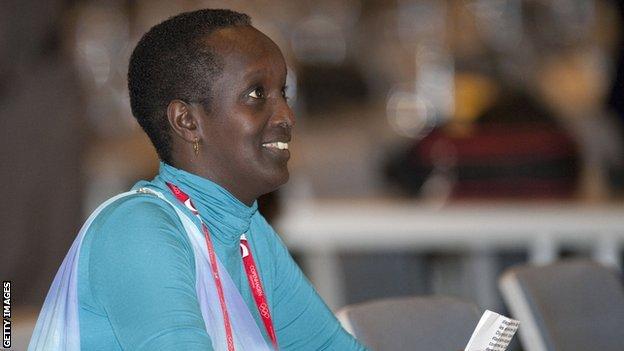 Burundi FA president Lydia Nsekera has described her imminent place on Fifa's executive committee as "an honour to Africa".

The Fifa Congress is expected to ratify her appointment in the Hungarian capital Budapest on Friday.

Nsekera will then become the first female to serve on the executive committee in Fifa's 108-year history.

"It's an honour to Africa and an even greater honour to my country Burundi," she told BBC Sport.

Just one of two women to have ever presided over an African football association, along with Liberia's Izetta Wesley, Nsekera has headed up the Burundian FA since 2004.

And she says the decision to co-opt a female onto Fifa's top decision-making committee is a major boost for the game.

"I am, first of all, very pleased that Fifa put a woman in its board of directors," she said.

"It's a very positive thing, especially for women fans of football."

The Burundian will serve until next year at least, with elections for a female representative to be held in 2013.

Nsekera is already a member of the organising committee for the Olympic football tournament and part of Fifa's women's football committee.

She also sits on the independent governance committee, which has been advising football's world governing body on how to improve its image.

In a separate development, Fifa is also expected to confirm South Sudan as its newest member on Friday.

The move has been accelerated by a proposed change, that delegates will vote on, which would mean that new associations need no longer be members of their own confederations for two years before joining Fifa.

South Sudan, who joined the Confederation of African Football in February, is set to become the first nation to benefit from the change - and will be Fifa's 209th member association.