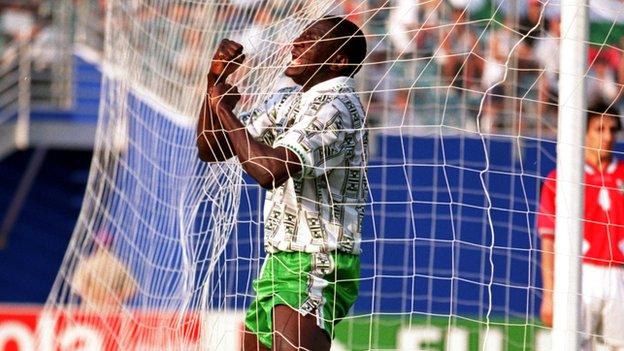 Former Nigeria captain Segun Odegbami is calling for a full investigation into the death of Rashidi Yekini.

The 1993 African Footballer of the Year died earlier this month aged 48.

Yekini was reportedly kidnapped shortly before his death, but the actual cause of death is still unclear.

"They took him away for three weeks and when they brought him back, they brought back his corpse - so what happened in the intervening period?" said Odegbami.

Rashidi was sane, healthy, fit and there was absolutely nothing wrong with him. Somebody like that should not just die

"Nobody is saying that he was killed but whatever they did to him - in an effort to cure him of an ailment he did not have - must have killed him.

"So that's why we are saying that an investigation should be conducted, so that at least we know what the cause of his death was. Where did he die? Where did they take him? Who treated him for what?

"This is an African football legend - an icon - and a mentor of so many people."

Nigerian police in Oyo State, where Yekini was living at the time of death, have told the BBC that no investigation has been opened into the former footballer's death.

Yekini's playing career was so successful that he is still Nigeria's all-time leading top scorer and is third on the list of goalscorers at the Africa Cup of Nations.

His tally of 13 Nations Cup goals is second only to Ivory Coast's Laurent Pokou (14) and Cameroonian Samuel Eto'o (18).

The Nigerian also claimed his country's first ever World Cup goal, netting against Bulgaria before famously celebrating with his clenched fists punched through the net.

Odegbami, a former team-mate, says people wrongly believe that Yekini, who lived as a recluse in later years, was suffering from depression.

"People have the impression that he was insane," said Odegbami, who was in contact with Yekini earlier this year.

"Rashidi was sane, healthy, fit and there was absolutely nothing wrong with him. Somebody like that should not just die and nobody understands why he died, where he died or what killed him.

"That is what we should remember him for, not for some concocted stories that people are bandying about.

"I believe that in his grave, he must now be willing that something be done to unearth the true story of his death."