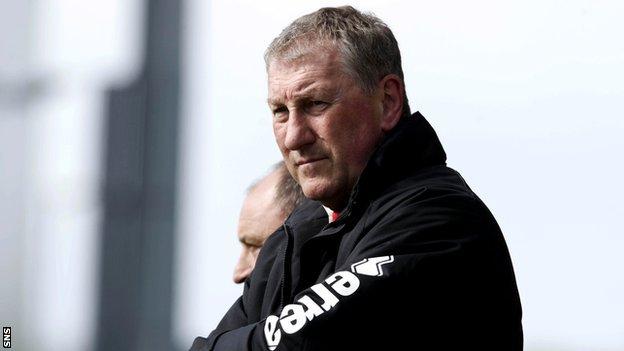 Inverness CT manager Terry Butcher has given his out-of-contract players until the end of May to decide whether they will stay with the club.

The Highland side have offered new terms to several first-team players whose contracts expire in the summer.

But some of his players are attracting interest from elsewhere, prompting Butcher to set the deadline.

We're looking at new faces for quite a few sections of the team but it depends whether players in those positions re-sign for us.

"It would be nice if most of them decide to stay but it's their choice," he told the club's official website.

But Tansey has interested St Johnstone and Motherwell, with Aberdeen manager Craig Brown keen on a move for Hayes.

"We've made what we think are decent offers in a challenging financial environment," said Butcher.

"We're waiting for replies. It's understandable that players needed time to make a decision.

"But we have the live possibility of bringing in new players and we're keen to finalise the squad much earlier than we managed to do last season.

"May 31 is the cut-off point for the new contracts for players who were with us this season. I hope they will come back to me by that date and let me know where they stand.

"We're looking at new faces for quite a few sections of the team but it depends whether players in those positions re-sign for us."