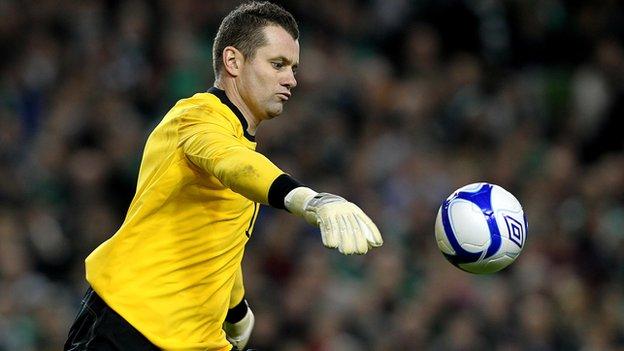 Republic of Ireland goalkeeper Shay Given has been given the green light to resume training next week after visiting a knee specialist in London.

Given's specialist confirmed the diagnosis of the Irish medical staff and their recovery management plan.

The news will come as a boost to manager Giovanni Trapattoni, who has found himself dealing with a lengthening injury list in recent days.

Given is expected to sit out Saturday's friendly against Bosnia Herzegovina.

The 36-year-old flew back to Dublin on Thursday afternoon after a whistle-stop trip to England to consult the doctor, who has treated him in the past.

A spokesman for the Football Association of Ireland said: "Shay Given is on his way back from visiting his specialist in London.

"The specialist has been in contact with the Irish medical team and agrees with their diagnosis and recovery management plan.

"Shay is expected to return to full training on Wednesday."

Trapattoni did not expressly rule Given out of Saturday's friendly against Bosnia at the Aviva Stadium but he indicated he would not risk one of his key men unnecessarily even if he wanted to play.

Trapattoni said: "I think he wishes to, but if he wishes and he has a problem...

"Our Euros begins in Poland, not at the Aviva or in Hungary."

We have St Ledger. We have Kelly, we have Paul McShane, we have O'Dea and we have also Ward. We have substitutes

Given's place is likely to be taken by Sunderland's Keiren Westwood, who has eight senior caps to his name.

Meanwhile, Paul McShane could yet find himself on the plane to Poland next month as Trapattoni attempts to find cover for his injured troops.

The 26-year-old trained with his team-mates in Malahide on Thursday after joining up with the squad on Wednesday following a late call-up.

McShane, who was initially among a stand-by list of five players when the party for Euro 2012 was named, seems certain to play against the Bosnians with Richard Dunne, John O'Shea and Sean St Ledger all struggling for fitness.

However, Trapattoni has revealed he will probably join the party for next week's training camp in Montecatini, Italy, and the friendly against Hungary in Budapest which follows it, and may yet head for Poland too.

The 73-year-old said: "He will probably come with us because we need one more. We may take 25 to Italy, it's no problem."

Asked if he would be retained when the squad heads for its tournament base in Gdynia on June 5, Trapattoni replied: "I can ask him then, but before that, we have Hungary.

"Hungary is a very difficult game and maybe we need to give the 23 before. Only with injury, we can decide to change or not."

Trapattoni has to confirm his final 23-man squad by May 29, but changes can be made right up until the day of the Republic's first game - against Croatia in Poznan on 10 June - in the case of injury, provided it is ratified by a committee of UEFA doctors.

In the circumstances McShane, or indeed any other player, could travel as back-up but then head home if not required, or replace an injured team-mate if permission was granted.

Trapattoni also revealed McShane is not the only man to have received a call, with defender Damien Delaney and midfielder Paul Green among those to have been alerted.

He said: "Delaney, Paul McShane - we have other substitutes and they have been contacted.

"We have called them in case we need them, Paul Green also. But we have time to evaluate the situation."

The Italian's plans have been thrown into confusion by a series of injuries, none of which appear particularly serious but all of which are concerns in the short term.

Dunne's lower abdominal micro-tear, O'Shea's ankle and St Ledger's groin strain have all required rest, while Kevin Foley is working his way back from a hamstring problem and Keith Fahey has been limited by a groin injury since his arrival in Ireland.

Midfielder Glenn Whelan missed training on Thursday, but only because of a sore throat.

If Given, O'Shea, Dunne and St Ledger miss out on Saturday, Trapattoni will be without four members of his first-choice back five, with left-back Stephen Ward the last man standing.

But having seen the likes of Darren O'Dea, Stephen Kelly and McShane deputise in the past, the Italian will have no qualms about using them once again.

"We have St Ledger. We have Kelly, we have Paul McShane, we have O'Dea and we have also Ward. We have substitutes."

O'Shea was able to train partially on Thursday, but Trapattoni admitted he will probably not risk him.

He said: "It's important in a game to be able to shoot, cross and tackle, and I think in this game, he probably won't play."