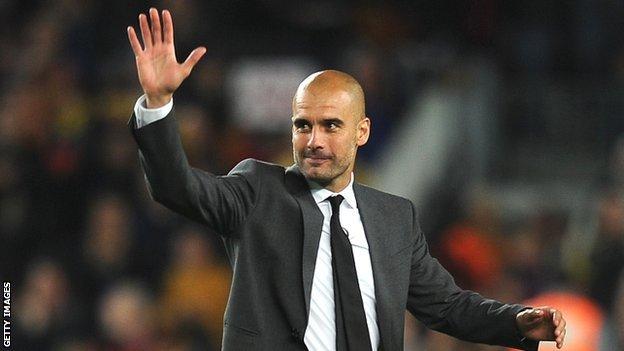 Departing Barcelona boss Pep Guardiola says he will be ready to return to management in the future for a club that "seduces" him.

The 41-year-old, who is quitting Barca to spend time away from the game, takes charge of his final match on Friday.

"I will receive all calls with pleasure, but for the next [few] months I have to recharge my batteries and my mind," said Guardiola.

"I will be ready [to return] if one club wants me and seduces me."

Guardiola announced that he would be stepping down from his role at the Nou Camp at the end of April, bringing an end to a hugely successful four-years.

The former midfielder is the most successful coach in Barcelona history, with three league titles, two Champions Leagues and a Copa del Rey among his 13-trophy haul.

He has a chance to end his reign in style on Friday by beating Athletic Bilbao in the Copa del Rey final at the Vicente Calderon Stadium.

A win will also neatly book-end his time with the club as a 4-1 cup victory over Athletic three years ago gave him his first trophy.

It also gives Barca a chance to provide a positive end to a disappointing season, which has seen them relinquish both their La Liga and Champions League trophies, with Real Madrid winning the former and Chelsea eliminating them in the semi-final of the latter.

"I've got the feeling we are very well prepared for this final," added Guardiola. "A final is always there to be won."

Guardiola's Barca side have not only been lauded for their success but also their style of play, with midfield duo Andreas Iniesta and Xavi and forward Lionel Messi rising to prominence under his management.

He was particularly close to Messi - describing him as "the best ever" player - while the Argentine suggested Guardiola was the main factor behind Barca's recent success.

Guardiola played for the Catalan club during the 1990s and early 2000s. He became Barca B coach in 2007 before taking control of the first team in 2008.

He will be succeeded at the Nou Camp by his assistant, Tito Vilanova.