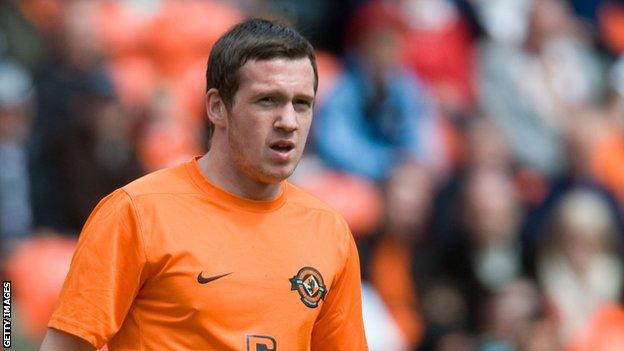 The 25-year-old's contract at Tannadice will expire this summer after a season hampered by injury problems restricted him to 16 games last term.

"I know about him. He's a good player. He's definitely on our radar," Ferguson told BBC Radio Cambridgeshire.

"We know there's interest from Scotland and from England. But that's as far as we've gone with it at the moment."

Craig Levein, the man who brought Swanson to the Tangerines from Berwick four years ago, called the attacking midfielder into the Scotland squad in September last year.

But a knee injury ruled him out of contention for his country's Euro 2012 qualifiers against Liechtenstein and Spain and he has been restricted to just eight appearances since.

Swanson has scored 12 times in 127 games for Dundee United, although 70 of those appearances have come as a substitute.

"He's had injury problems but he's got a lot of ability," added Ferguson.

"He got into the Scotland squad last year and I have spoken to one or two people about him, including Craig Levein."

Swanson said earlier in the week: "It's time to make a fresh start and I fancy playing in England now so I will talk to any club that shows an interest.

"I'd certainly be interested in anything Peterborough have to say and it would be interesting playing for a member of the Ferguson family."

Posh have yet to receive any offers for transfer-listed duo George Boyd and Paul Taylor but Ferguson says offloading the want-away pair will not affect his summer recruitment.

"I'm planning without them. I have to. I've got to assume that somebody's going to buy them," he said.

"The good thing for me is we're trying to get our business done without having to sell them first.

"The chairman's quite happy to spend money now and get ones in. If we get them in and the players on the list don't go then when we just get on with it."