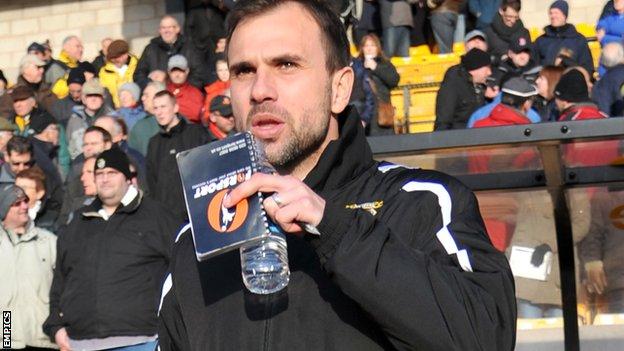 Carl Fletcher has agreed to stay on as Plymouth Argyle manager until at least the end of the next season.

In September, the 31-year-old stepped up from captain to take over as player-manager after

All three have agreed to one-year rolling deals, but will leave his role.

Initially employed on a caretaker basis, they got the job until the end of the season in November.

They led Argyle to Football League safety after the club began the season with two points from their first 12 matches as the club battled administration.

"I'm honoured and really happy to be able to sign a contract," said Fletcher.

"We have tried to lay certain foundations, certain things we want around the club, how we want the club to come across and what we expect from players.

"It's nice to be given the chance to carry that on and keep putting the pride back in the shirt."

Earlier this month, Fletcher said he was unsure whether he would be given the job on a full-time basis while owner James Brent said the Argyle board would review how Fletcher had done before deciding whether to extend his deal.

But Brent has decided to keep faith with the former Welsh international.

"I am delighted that Carl, Ro and Nance have agreed to continue their leadership roles at our club," said Brent.

"In avoiding relegation, they proved to us all that passion, commitment and teamwork can deliver what more experienced pundits thought was impossible.

"After three very challenging years, our club is now riding high. Stability has returned and self-belief is returning."

But Fletcher has decided he will no longer be part of the playing squad as he concentrates solely on running first-team affairs.

As a player, Fletcher won 36 caps for Wales and captained his country on one occasion as well as playing in the 2006 FA Cup final for West Ham.

He initially joined Argyle on loan from Crystal Palace in February 2009 and the deal became permanent that summer.

He has made 107 appearances for the Home Park Club, scoring nine goals, but his last match was Argyle's shock 2-0 FA Cup first round replay loss at Southern League Stourbridge in November.

"Last year, it was a good decision that I made, for the best for the team," he said.

"A lot of people said I needed to play, but I felt that was not right for the whole club and the team."