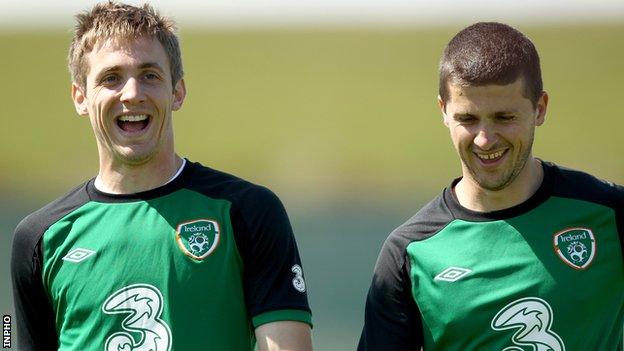 Shane Long is determined to win a four-way battle for the right to partner Republic of Ireland skipper Robbie Keane at Euro 2012.

Doyle has been Keane's regular partner but Long believes he is "in the frame".

"I have to try to convince Giovanni Trapattoni over the few friendlies before we get to the Euros," said Long.

Long spent long periods of the last Premier League campaign as a frustrated bystander as he attempted to manage a debilitating back injury but he is now raring to go.

He added: "There are five us now fighting for that position.

"I think Robbie is very secure in his place, and deservedly so and there are four of us fighting for the other position."

The competition between the four men is intense, although Long insists that whoever gets the nod will have the full backing of those who miss out.

"We are all fairly close. Myself and Kevin are close off the pitch and we don't really talk about it," continued lonig.

"Whoever plays is going to get the full support of the other three and that's the way it should be.

"He [Trapattoni] is obviously a very experienced manager and he is not afraid to change it up when he needs to.

"I think he has confidence in each one of the five strikers that play."

Long sat out a training session earlier this week ahead of Saturday's friendly against Bosnia, with Trapattoni acutely aware of his needs, and the striker is grateful for his manager's understanding.

"The last month is the first time since October I have been pain-free playing football.

"It's good timing coming into the Euros that I'm back to the top of my game and hopefully putting a problem in the manager's head."

Long was a schoolboy when Ireland last qualified for a major tournament, the 2002 World Cup finals.