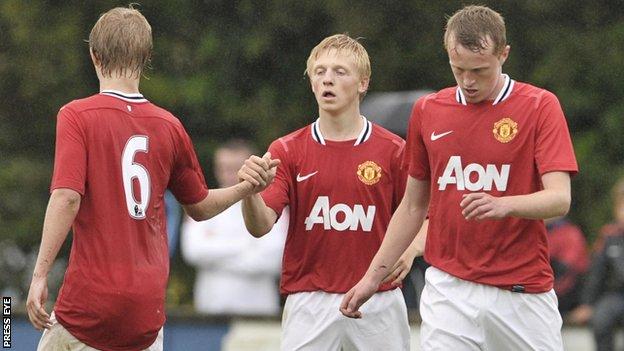 County Tyrone will host Manchester United on the opening day of this year's Milk Cup on Saturday 21 July.

In a new departure this year, the county teams will have home advantage for their games.

Tyrone's clash with last year's Premier beaten finalists will take place in Omagh but a precise venue for the game has yet to be finalised.

In the Junior tournament, County Down will host last year's champions Everton.

Because of the Olympic Games, the competition will have an earlier date than has traditionally been the case.

The competition will kick off on Saturday 21 July with other Premier games including County Armagh welcoming Tottenham, Fermanagh hosting Newcastle and County Londonderry at home to CSKA Moscow.

Other junior fixtures on the opening include County Antrim's battle with Liverpool, Armagh's battle clash CSKA Moscow and Tyrone's tussle with Ipswich.

Northern Ireland's Elite squad will be up against Chile on day one with the other Elite games seeing Denmark facing USA and Turkey up against Mexico.

After the first round of games, the action will resume on Monday 23 July with the concluding series of group matches a day later.

"This year we are pleased to again be welcoming the national team from Chile to the Elite competition, Desportivo Brazil in the Premier, along with newcomers Union Temuco, from Chile, in the Junior section," said tournament chairman Victor Leonard.

O'Neill played at the Milk Cup for Ballymena and also Coleraine when they reached the Premier final in 1985 but lost to Newcastle United.

Evans lined out for his former club Manchester United as well as Northern Ireland at the tournament, captaining his country to victory over Denmark in the 2009 final.

Little's goal in the 2008 final against Chile helped Northern Ireland win the Elite title for the first time in 11 years.

It was his sixth consecutive year in the competition after making his debut in 2003 for the County Fermanagh Junior side.