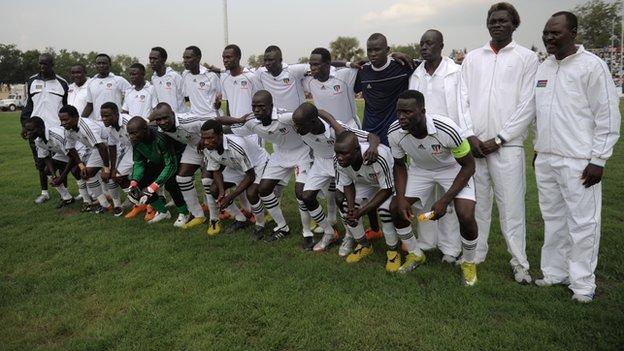 The African country was voted into full membership by delegates at Fifa's annual congress in the Hungarian capital Budapest.

The team will now be eligible to play in the qualifiers for the 2015 Africa Cup of Nations and 2018 World Cup.

We are still suffering from war, so we promise that we will develop football to fight against war, hunger and poverty

"I want to assure you that we are going to follow the statutes and regulations of Fifa and obey the law of our good game," said South Sudan FA president Oliver Mori Benjamin in an acceptance speech.

"In particular, we are still suffering from war, so we promise that we will develop football to fight against war, hunger and poverty.

"I want to assure you that in my state in South Sudan, Abyei, we are still in a war zone but I promise in a few days, we are going to raise the flag of Fifa in Abyei for the good of our people."

South Sudan and Sudan have been blighted by conflict in recent times, with peace talks between the two nations due to resume next week after several border skirmishes and bombardments.

"I want to thanks the president of Caf for our admission to Caf in Gabon [in February] - we are really so happy and satisfied under your leadership in Africa.

"I would like to thank the Sudan national association for football for your fruitful co-operation and for your acceptance of our membership in Caf."

South Sudan has been able to join Fifa just 10 months after independence thanks to a change in the body's statutes.

Previously, any new state had to be a member of its confederation for two years before being eligible to join Fifa.

South Sudan's FA had previously been told that the earliest it could become a Fifa member was 2014.

But delegates gave a 98 per cent "yes" vote to the proposal to admit the South Sudanese in Budapest on Friday.

In a friendly game organised as part of the independence day celebrations in July 2011, a South Sudan side lost 3-1 to Kenyan team Tusker FC.

Meanwhile, Lydia Nsekera's place on the Executive Committee was also ratified on Friday as the Burundian made Fifa history.

"I am delighted we have the first ever lady in our executive committee in 108 years," said Fifa chief Sepp Blatter after she took her seat on the podium to a standing ovation from delegates.

"The people of Burundi will bang their drums today, they will be very proud," Nsekera, 45, told delegates.

"It is also an important date in my family because 25 May is the birthday of my husband who passed away in 2003.

"In my family we celebrate someone's birthday even if they have passed away, so it's a special day and I thank you."