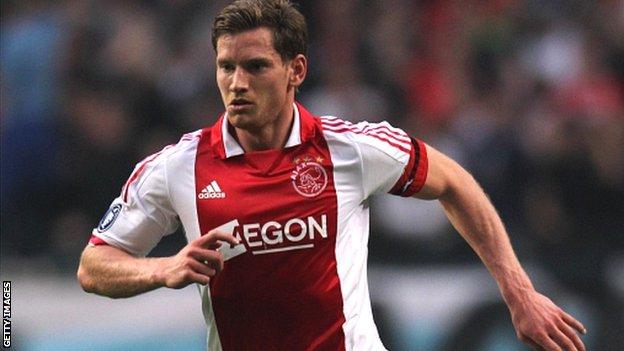 Dutch champions Ajax hope to reach a swift agreement with Tottenham over the sale of captain Jan Vertonghen.

Spurs have seen two bids rejected as Ajax seek 15m euros (£12m) for the 25-year-old Belgium centre-back, who has a year left on his contract.

"We hope to make a deal quite soon," an Ajax spokesman told BBC Sport. "Jan deserves a move to a big league and wants to join Spurs.

"But he has a price and that's what we're talking about with Tottenham."

Spurs chairman Daniel Levy travelled to the Netherlands on Monday and held talks with senior Ajax officials at the Amsterdam ArenA.

It is understood that both sides were encouraged by the negotiations but there was a difference of opinion on the fee.

Spurs are reluctant to meet the current asking price and, with only 12 months left on his deal, Vertonghen wants Ajax to relax their demands.

White Hart Lane is his preferred destination, although he has been quoted as saying Arsenal are interested in him too.

Tottenham's lack of Champions League football is a factor in the amount they have offered so far, but Ajax feel 15m euros is fair.

Vertonghen scored eight goals in 39 appearances last season and helped his side retain their Eredivisie title.

As Belgium are not involved in Euro 2012 there is plenty of time for further discussions to take place.