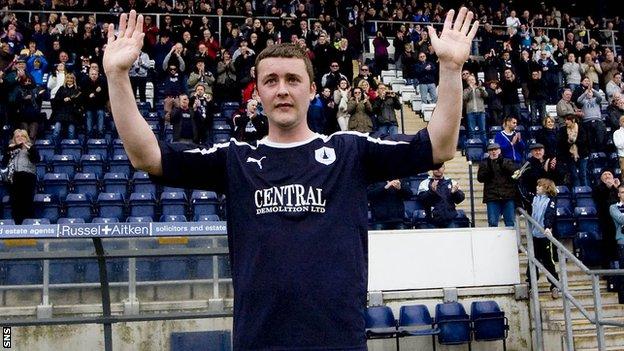 The 24-year-old left Falkirk under freedom of contract at the end of the season, having started his career with the Bairns in 2006.

He will compete with Callum Davidson for the left-back berth at McDiarmid Park and can also operate in a central defensive role.

"I'm glad to get the opportunity to come here," Scobbie told the St Johnstone website.

"I played over 100 SPL games with Falkirk before they were relegated so I feel equipped to help Saints. The manager [Steve Lomas] didn't have to do a sales pitch on the club.

"Obviously European football was a major factor but Saints had a very good season and they have a good reputation in the game. Hopefully we can kick on next season.

"I have been looking at some of the teams we could go up against in the Europa League qualifiers and there are some big names in the draw next month.

"I got a taste of European football with Falkirk when we qualified through the Scottish Cup final with Rangers. We played FC Vaduz of Liechtenstein.

"We won 1-0 here but unfortunately went out over two legs after extra time. It was short and sharp but still great experience for me and the lads."

Scobbie earned eight Scotland Under-21 during his six seasons with the Barins and feels the time is right for him to take on a new challenge.

"We have parted on very good terms and [Falkirk manager] Steven [Pressley] even spoke to Steve Lomas to give me a reference," said Scobbie.

"I had a few other options in the SPL but with a kid on the way in August I felt this was the move for me."

St Johnstone assistant manager Tommy Wright added: "Tam is a good age for us and it's good to get the first of our signings on board.

"He has a wealth of SPL experience and that will be invaluable."