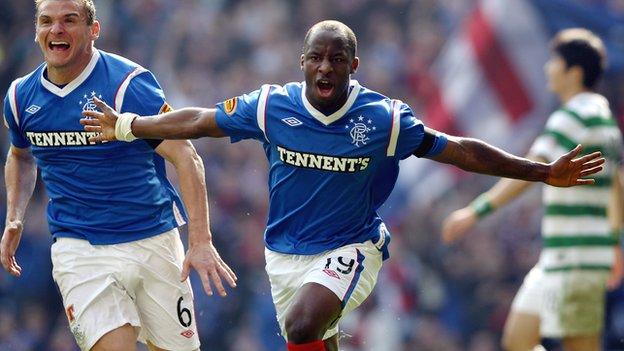 Rangers winger Sone Aluko believes his return to the Nigeria squad has much to do with his brilliant form for the troubled Scottish side.

Aluko, 23, has not played for the Super Eagles since making his debut against the Republic of Ireland in May 2009.

But after emerging as a shining light in Rangers' dark season, his displays have earned him a recall for Nigeria's qualifying matches in June.

"It really feels great to be back in the squad," Aluko told BBC Sport.

Being called up for Super Eagles is always very special

The wideman, who did not play in the 1-0 friendly defeat in Peru on Wednesday, is now in line to contest next month's World Cup qualifiers at home to Namibia and away to Malawi.

He may also take to the field on the weekend of 16-17 as the Super Eagles look to reach the second round of 2013 Africa Cup of Nations qualifying when hosting Rwanda, with the game goalless after the first leg.

"It's a great honour and a really proud moment for me and my family being involved again," he added.

"Being called up for Super Eagles is always very special, a realisation of childhood dreams but after the good season I've had personally with Rangers it really caps off a happy time for me in football."

Aluko, who played for the Nigeria U-20 and U-23s during his period in the senior international wilderness, revealed he was never frustrated at any point.

"I always have faith and believe that if I keep working hard and maintain high performance levels my time will come and thankfully the opportunity has arrived again.

"Until I retire I will always have this attitude."

Aluko moved to Glasgow in November last year, making a significant contribution himself towards a £150,000 training compensation payment to his former club Aberdeen.

Despite taking a pay cut with the club in administration, the former Birmingham City man scored 12 times in 23 appearances for Rangers to emerge as a standout player.

"It's been a long season for the club and some testing times but it's a massive club and a well supported team," he said.

"Hopefully the new owners will get it on track and back to levels it should be at," he added.

Amid reported interest from clubs in Spain, Italy, Germany and France, Aluko is firmly focused on international games for Nigeria in the off-season and not the speculations in the media.

"I'm still contracted to Rangers. There's so much to look forward to, my holiday has been cut short and the excitement and challenges of playing in Africa is a priority for now."

With the uncertainty surrounding Rangers casting doubt over either party being able to exercise a two-year contract extension negotiated when he joined last year.

And on his highly-publicised pay-as-you-play contract with Rangers, the former England youth international was quick to set the record straight.

"I don't want to be the one to let the truth come between a good story but it's all fabricated rubbish," he said.