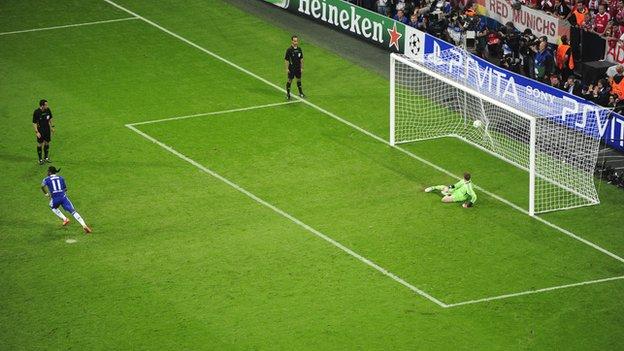 With the dust having settled on some of Europe's top leagues, BBC Africa Sport takes a look at the players from the continent to have won major honours this year.

Didier Drogba's match-winning penalty in the shoot-out crowned the Ivorian's eight-year stay at the London club in perfect fashion, ensuring that it was mission accomplished for the 34-year-old - who had also scored in regulation time.

Drogba and fellow Ivorian Salomon Kalou, who started last Sunday's final, are leaving the Blues in the off-season while the future of Ghanaian midfielder Michael Essien, an unused substitute in Germany, is unclear.

Nigeria's John Obi Mikel confirmed the faith of interim coach Roberto di Matteo by playing every minute of the final, just as he had both legs of the semis against Barcelona.

Surely the most dramatic finale to any European league this season came in England, where Manchester City won the title thanks to a last-gasp 3-2 defeat of Queens Park Rangers.

Ivory Coast's Toure brothers both played their part in City's first title for 44 years, with midfielder Yaya widely praised by many as being the club's most important player.

He certainly scored two of their most important goals, as his brace at Newcastle United in City's penultimate game of the season proved pivotal to their league triumph.

Yaya's elder brother Kolo endured a more difficult season however, with the defender having sat out most of the games after being punished for failing a doping test.

In the FA Cup, Drogba once again played his part, scoring Chelsea's all-important second goal as the Blues sunk Liverpool 2-1.

The French league witnessed a new champion this season as Montpellier lifted their first crown.

Montpellier have seven Africans on their books but the stand-out player from the continent was Morocco's Younes Belhanda,who was named the league's young player but missed out on the senior award.

Come the final day, when Montpellier beat Auxerre 2-1 to clinch the title, John Utaka was the hero as the Nigerian grabbed both goals.

Four Africans celebrated winning the title with Ajax Amsterdam in the Netherlands.

The African contingent is headed by Cameroon midfielder Enoh Eyong who made 22 appearances.

Ivorian Emmanuel Eboue scored three goals in 31 appearances for Turkish champions Galatasaray as the Ivorian became the only African titleholder in that country.

The Istanbul club clinched the title when drawing with bitter rivals Fenerbahce, for whom both Senegal's Issiar Dia and Nigerian Joseph Yobo were playing.

But the latter duo had their moment to savour, as Fenerbahce beat Bursaspor 4-0 to win the Turkish Cup final.

Meanwhile, goalkeeper Kadu was restricted to just one game for the former European champions.

Like Ajax, Anderlecht secured a 31st league title, with four Africans helping the campaigns of the Belgian champions.

Senegal defender Cheikhou Kouyate was a regular for the side, while the attacking DR Congo duo of Dieudonne Mbokani and Patou Kabango scored 16 goals between them.

Olympiakos reigned supreme in Greece after clinching a league and cup double.

Algeria striker Rafik Djebbour was the club's second highest scorer with 12 goals, while the other Africans sharing in the joy were fellow Algerian Djamel Abdoun and Cameroon's Jean Makoun.

There were no Africans involved in any of these three major European leagues.

Real Madrid won the title under Jose Mourinho, while Serie A champions Juventus won their 30th league crown without the help of any Africans - just as Dortmund did while winning a first league and cup double.