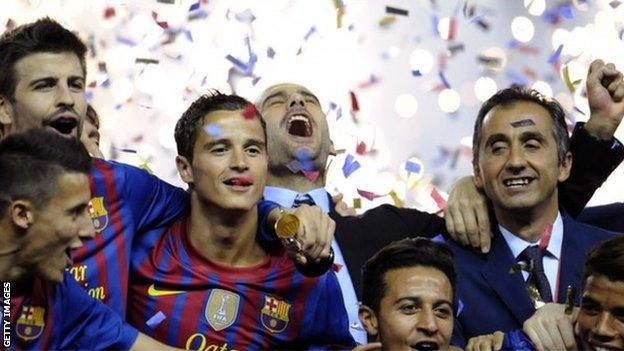 Pep Guardiola signed off as Barcelona coach with his 14th trophy in four years as his side beat Athletic Bilbao 3-0 in the final of the Copa del Rey.

Pedro Rodriguez's brace either side of Lionel Messi's 73rd goal of the season earned Barca a comfortable victory.

Despite reports linking him to Chelsea, Guardiola later appeared to confirm his intention to take time out of the game.

"I feel like I left some good things behind," he said. "Now I will rest and try in the future a new challenge."

Guardiola, 41, is the club's most successful coach though Barca ended the season relinquishing both their La Liga and Champions League titles.

"We had a very good year, we won four titles and winning this cup gives them better value," Guardiola said. "I'm happy to close out the season this way."

Ernest Macia of Catalunya Radio said he thought Guardiola would take time out from football.

"I'm sure he will stay out of football for one year - it could even be two," he told BBC World Service. "I think he will decide what to do at the end of next season."

Macia believes if Guardiola were to change his mind and move immediately, Barcelona's fans would respond sympathetically.

"If that moment comes, he would speak directly to Barcelona's fans and say that he has chosen, for example, to go to the Premier League, and people will respect that," said Macia. "He has earned the respect and the right to decide his future."

Guardiola announced at the end of April that he would be stepping down from his role at the Nou Camp to spend time away from the game, bringing an end to four successful years.

The former Spain international, who will be succeeded at the Nou Camp by his assistant Tito Vilanova, has revealed he will be ready to return to management in the future for a club that "seduces" him.

He played for the Catalan club during the 1990s and early 2000s and was appointed Barca B coach in 2007 before taking control of the first team in 2008.