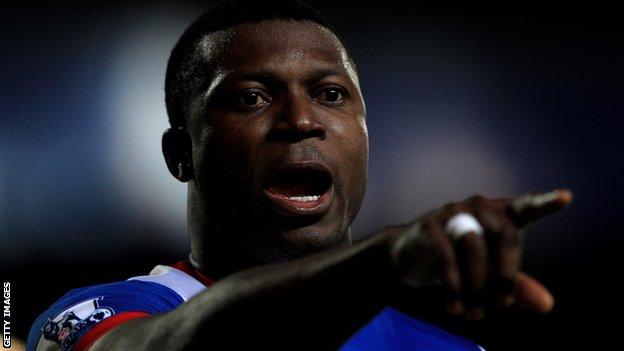 The 29-year-old has told BBC Sport that he is not keen on playing in the Championship, after Rovers dropped out of the top flight.

Yakubu was one bright element in an otherwise gloomy season for Blackburn, scoring 18 goals in total.

He has two years to run on his contract but - a proven goalscorer - there would be interest from other clubs.

I may be playing in the Championship. I may be in the Premier League.

The former Everton and Middlesbrough striker netted 17 goals in the Premier League, including two in the 3-2 victory at Manchester United in December.

His tally accounted for more than a third of Blackburn's entire total and, though he played for Leicester City in the Championship, a return to the second tier of English football is not on his wish-list.

"I still have two years left with Blackburn, but I played in the Championship before." he said.

"It was good but I don't want to play in there again."

These comments will come as no surprise to Blackburn's beleagured boss Steve Kean. He realises that Yakubu may see his future elsewhere, with the likes of QPR and newly-promoted Reading reportedly interested.

Yakubu is aware that Blackburn got his career back on track after he fell out of favour at Everton and spent a spell on loan at Leicester.

"The people and players at Blackburn are great. Without the players, I would not have had the season I had," he added.

"They gave me the opportunity to come back strong and to show what I could do in the Premier League, week in week out."

Yakubu is currently in Zimbabwe, where he is featuring in a testimonial match for former Portsmouth teammate Benjani Mwaruwari.

He is one of a number of senior Nigerian players omitted from the squad for forthcoming international matches, along with John Obi Mikel, Peter Odemwingie and Taye Taiwo.

With his international future in doubt, Yakubu will be determined to make sure his club career continues at the highest level.

But it seems the Blackburn player's head and heart are at loggerheads over where his future lies.

"In football, you never know what is going to be, but Blackburn really has been a part of me," he said.