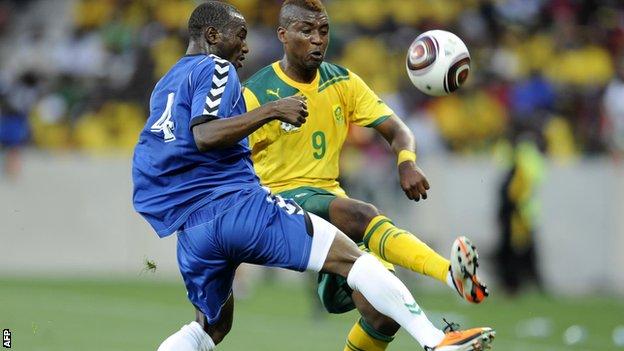 Sierra Leone's preparations for next month's World Cup and Nations Cup qualifiers have been thrown into disarray due to a row with a construction company.

It relates to work carried out on the Sierra Leone FA headquarters and an unpaid bill of US$67,000.

Bailiffs have impounded a bus belonging to the SLFA, whose offices have also been locked.

All this happened whilst officials were in Budapest at the Fifa Congress.

The squad, meanwhile, is gearing up for 2014 World Cup qualifiers, at home to Cape Verde on 2 June and away to Equatorial Guinea on 9 June.

We have been forced to move from one internet cafe to another, just so we can communicate with the outside world

They then face São Tomé and Príncipe in Freetown on 15 June in the second leg of their Africa Cup of Nations first round qualifier.

SkySL Limited has built the Sierra Leone Football Academy, which is being funded by Fifa.

According to SLFA spokesman, Sorie Ibrahim Sesay, the bill was due to be settled in phases once work had been completed.

The SLFA argues that a perimeter fence needed erecting.

"We could not ask Fifa to pay them, because the work had not been completed," said Sesay.

The bus, which has been impounded for a week, is used to transport teams from the Premier, First and Second divisions to league matches.

Court proceedings were started by SkySL Limited. According to Sesay, the first that the SLFA knew about it was when judgement was passed.

Without offices to work from, the SLFA has been forced to adapt.

"It is very inconvenient for us," said Sesay.

"We have been forced to move from one internet cafe to another, just so we can communicate with the outside world."

This is not the first time that the SLFA has had its offices locked by a Freetown High Court order.

Last December, they were shut out over a dispute with a travel agency. And in 2010, the doors were bolted after the SLFA failed to pay National Revenue Authority (NRA) tax.

This latest incident has come at a key time for the national side, ahead of three matches in June, including a crucial Nations Cup qualifier, in which they trail 2-1.

"We have to communicate with our players, the visiting teams, Fifa - with regards the referees - and even Caf," Sesay said.

"As it is now, we cannot do that with relative ease. It has hampered our preparations."