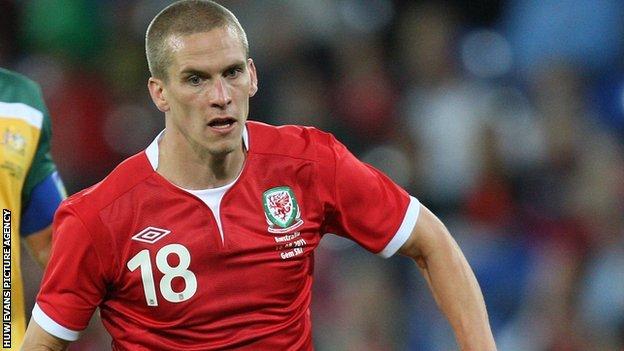 Steve Morison says the ambition to play at the 2014 World Cup in Brazil is behind Craig Bellamy's decision to carry on playing for Wales.

Bellamy is in the Wales squad preparing for Sunday's friendly against Mexico in New York.

"Craig wants to get to the World Cup more than anybody," said Morison, 32.

"[It's] especially because Gary Speed was a good friend of his.

"He feels he still has something to prove and has a lot to offer.

"He is good around the other players and he wants to reach Brazil as much as the rest of the squad.

"I can't see him retiring from Wales any time soon. Long may that continue. He is still a quality player.

"I have trained and played with him as well as against him in the Premier League. He's a great player and I'm glad he is here."

Former Fulham manager Coleman took a background role for the Speed memorial fixture against Costa Rica in February that ended in a 1-0 defeat.

That leaves only the clash with Mexico and an August friendly against Bosnia-Herzegovina ahead of the opening qualifier at home to Belgium in September.

Morison says Wales' run of four wins from the last five games of Speed's tenure underlined their potential to reach a major finals for the first time since 1958.

The Norwich player said: "Our plan is to qualify for the World Cup

"That is what Gary Speed put in place when he first came in.

"The aim was Brazil and he went a hell of a long way to putting us on the right path.

"We have put something in place and the nucleus of that is still here apart from the person in charge.

"Hopefully Chris Coleman can carry it on and we keep going in the right direction.

"The way we have performed in the last year has been fantastic.

"If we can carry that on we will be a match for anybody. Sunday is another step towards our goal."

Morison admits losing midfielders Gareth Bale and Joe Ledley to injury ahead of the game against Mexico is a "blow".