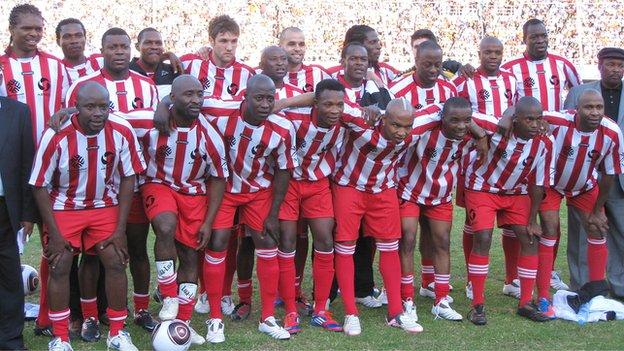 A host of stars from Africa and beyond, including Nigerians Nwankwo Kanu and Yakubu Aiyegbeni, took part in Benjani Mwaruwari's testimonial match in Harare on Saturday.

The game also featured El-Hadji Diouf and Khalilou Fadiga of the Senegal side that reached the quarter-finals of the 2002 World Cup.

The Zimbabwe national side beat the All-Stars 7-4 with Benjani playing on both teams and scoring in both halves.

The game was held to raise funds for the Benjani Mwaruwari Foundation, which will help the underprivileged in Zimbabwe.

"This was for the fans, and I want to give back to the country," said Benjani.

Benjani, 33, retired from international football in 2010, but is still active at club level.

He began his career in Europe with Auxerre in France, before moving to England, where he played for Portsmouth, Manchester City, Sunderland and Blackburn.

After a second spell at Portsmouth in the just-ended season, he is likely to choose to move to a club in South Africa's Premier League.

"It's a great feeling to be part of this," said Lomana LuaLua, who played alongside Benjani at Portsmouth in the English Premier League.

"We respect him, we love him, he's a brother and a very humble person, and us all being here says it all."

Diouf is one of Benjani's closest friends, although the two never played at the same club.

"He's a guy who never shouts, never gets angry and is easy to talk to," said Diouf.

"In my country the singer Youssour N'Dour is a minister of culture, and if Benjani continues what he's doing and helping the poor, he can become the minister of sport for Zimbabwe."