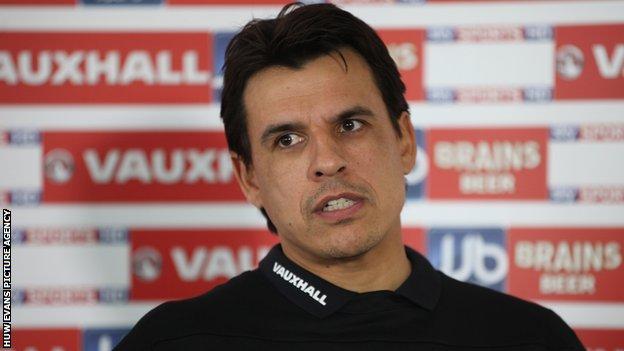 Manager Chris Coleman will finally realise a dream when he takes charge of his Wales side against Mexico in New York.

Coleman was named as Gary Speed's successor but allowed Osian Roberts to lead the side for the Speed memorial game against Costa Rica in February.

Coleman has had to wait a while for his first match in charge of his country.

"Managing my country was something I always dreamed of doing since I became a manager," said Coleman.

The former Fulham boss's decision to hand control to Roberts for an emotional night in Cardiff was roundly applauded but it has meant he has had to wait nearly four months to take control of his first Wales game.

That, though, will all end when Coleman's Wales face a Mexico squad including Manchester United's Javier Hernandez and West Ham's Pablo Barrera, and who are 21 places above them in the world rankings, at the MetLife Stadium.

Coleman, 41, who was named as the successor to Speed in January, flew out to America earlier this week and cannot wait to start his new job.

"I'm very excited about leading Wales and I just want to get started," said Coleman.

"It's a new experience and I'm keen to learn. The game can't come around quick enough. As an international manager, there are a lot of off-the-field things that you need to do.

"But being with the squad and preparing the players for match-day is the most enjoyable bit."

Coleman has been deprived of the services of midfielders Gareth Bale and Joe Ledley through injury, although he has been boosted by the presence of Craig Bellamy, who had appeared set to retire from international duty.

But ex-Wales defender Coleman has also faced a goalkeeping selection headache with Wayne Hennessey, Boaz Myhill and Lewis Price all absent from the trip to the United States.

That means Aberdeen's Jason Brown, who won the most recent of his two caps in November 2006, is set to be handed the starting role.

Coleman believes it is a real opportunity for the 30-year-old to stake a claim for the opening World Cup qualifier against Belgium in September, which first-choice keeper Hennessey could miss as he recovers from his torn cruciate ligament.

"But when you lose players you are giving another player a chance. It's how I look at it. Jason hasn't had much international time of late, but he's in good nick and it's an opportunity for him to show people he's a good goalkeeper."