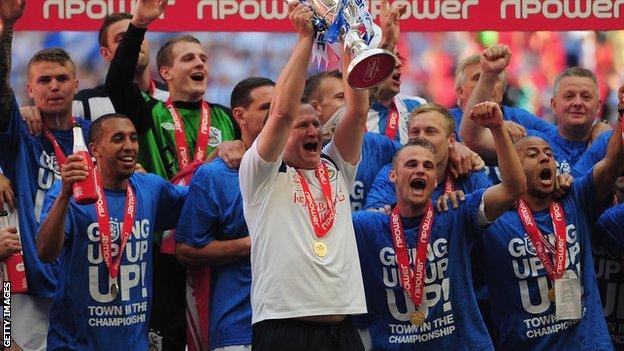 The Terriers beat Yorkshire rivals Sheffield United 8-7 on penalties after 120 minutes failed to separate the two teams in the play-off final at Wembley.

Grayson took over from Clark in February and told BBC Sport: "Credit goes to Lee Clark because he put most of that team together.

"We came in with a remit to finish the job off and we've managed to do that."

The former Leeds boss has now guided three teams to promotion from League One having taken Blackpool up via the play-offs in 2007 and sealing automatic promotion with the Elland Road club in 2010.

Despite the positive result he admitted he is yet to put his mark on the team: "This promotion is different. We came in at the end of February so we only had three months to work with the players.

"There'll be players with us here today that may not be with the club next season and it won't be until then that I stamp my authority on the team."

Simon Grayson was a play-off winner as a player with Leicester in 1994 and 1996, and took Blackpool up to the Championship through this route in 2007.

Blades keeper Steve Simonsen missed the vital penalty for his side to hand victory to the Terriers.

Grayson praised United's efforts: "Sometimes it's written in the stars and you have a bit of luck.

"How we recovered from missing our first three penalties I'll never know. I feel sorry for Sheffield United because someone had to lose and they're a good team with a good manager. Hopefully they can go up next year."

Reading loanee Sean Morrison was successful in his attempt from the spot, to cap off an impressive display alongside Town skipper Peter Clarke.

The Huddersfield boss was unsure whether he would be able to retain the services of the 21-year-old centre-half: "We'll assess the situation with the chairman. He's not our player.

"He's got a very good partnership with Peter but whether we try and sign him will depend on other availabilities and budgets I have at my disposal."